De Wallen (de Walletjes) district is located in the heart of old Amsterdam and borders from the north to the central city square Dam. 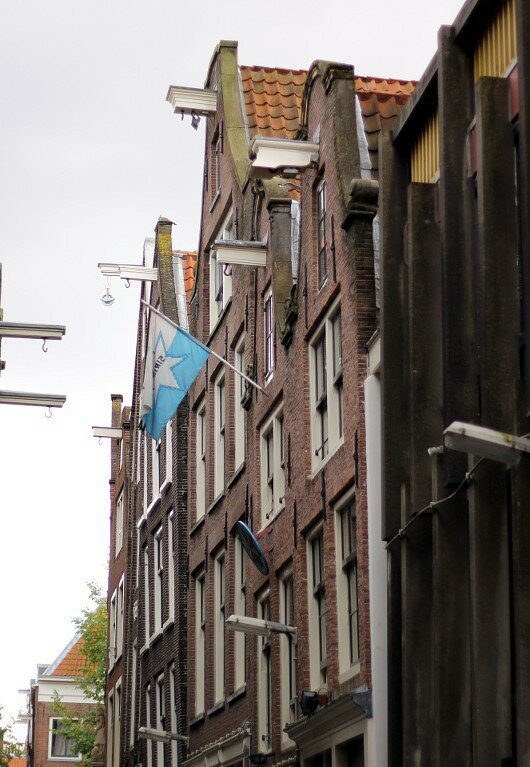 The most popular tourist part of the area is between the streets of Damstraat and Lange Niezel, is the famous "Red light district", which is sometimes called "Quartier Rouge" (map). It is crowded here at any time of the day or night. 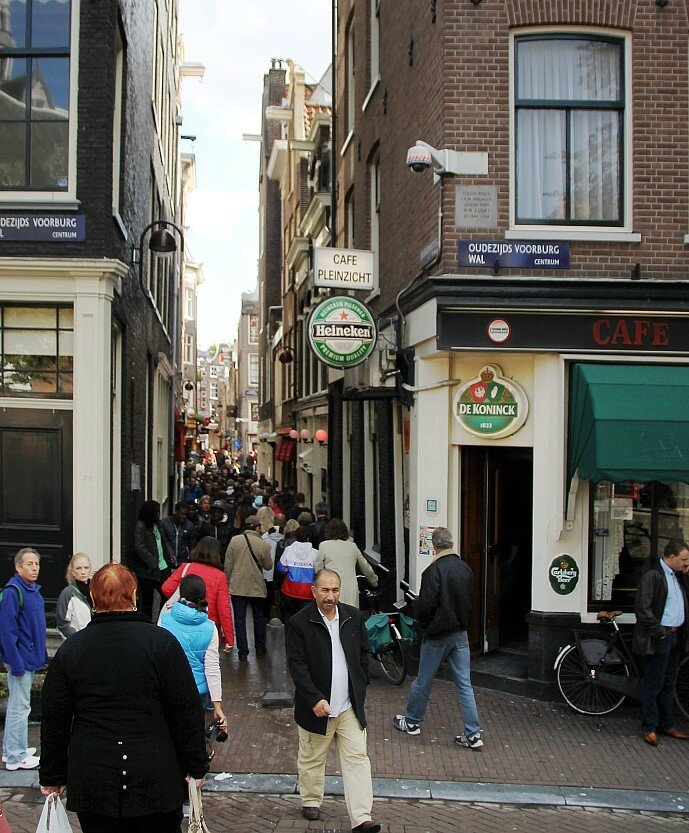 "Bad quarter" is a few narrow streets that occupied institutions specializing in the satisfaction of a wide variety of sexual desires, as well as on the sale of accessories for love pleasures. 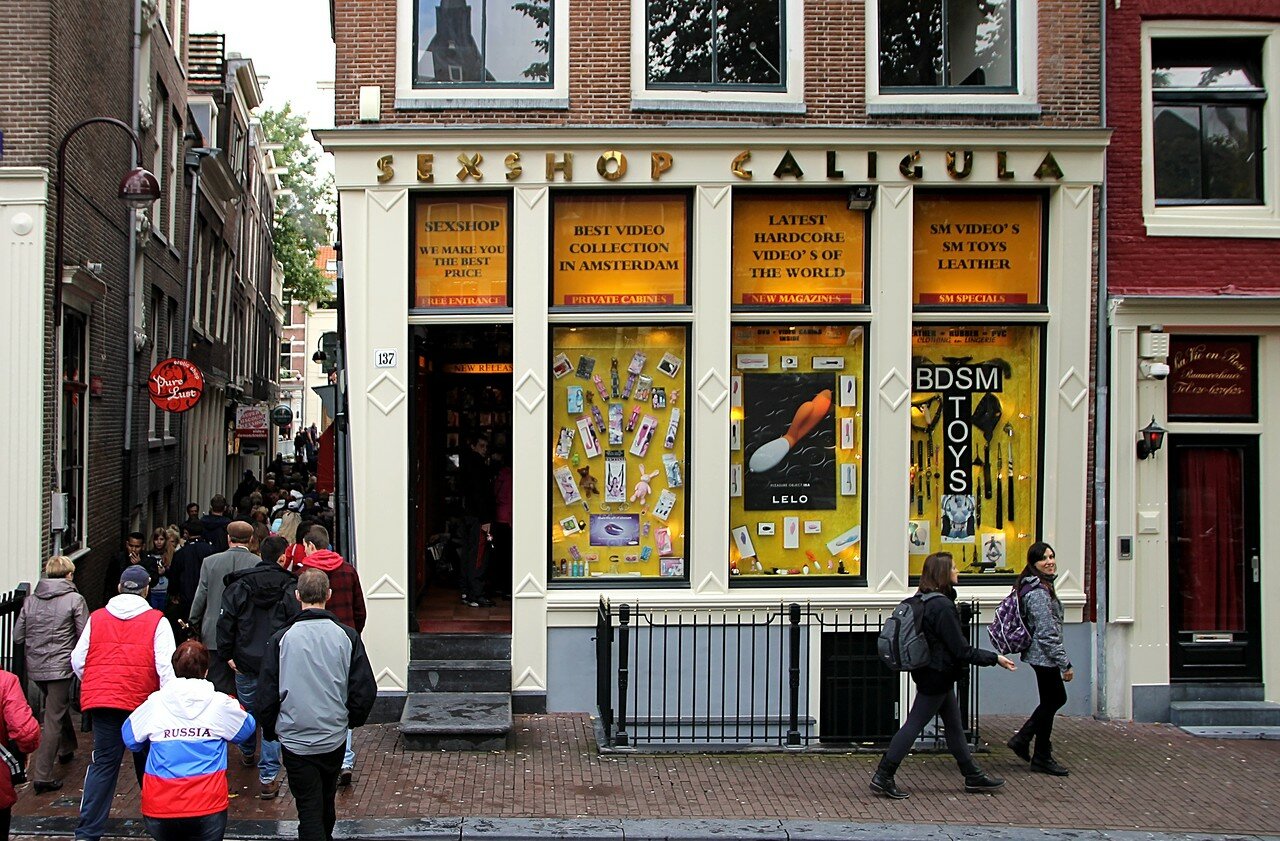 The symbol of the quarter is the girl outside the window, is the main form of advertising of local "goods". 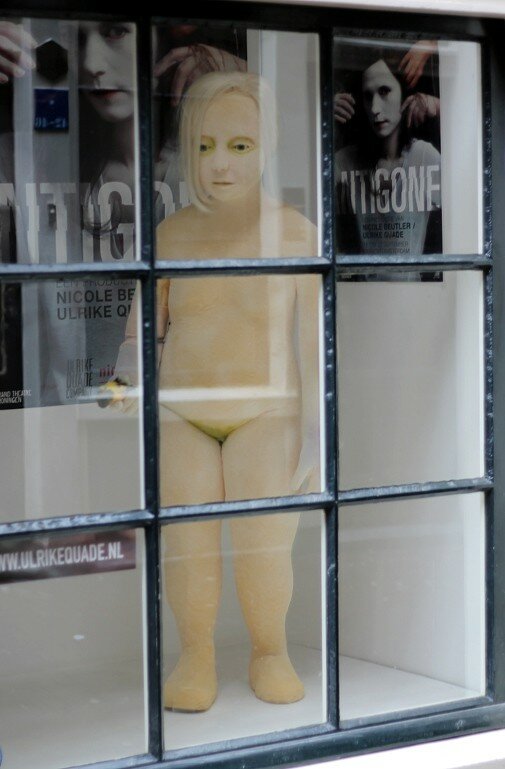 The technology of selling love is very simple and effective - the first floors of the buildings are a string of little rooms with large glass windows, behind which the workers of the bed flaunt their charms. If the client shows interest, the window opens, and after the financial and other details are agreed, the curtain is lowered. The usual price for a session lasting 15-20 minutes is 50 euros, but you can find a girl for 30 euros at a great desire. This, so to speak, "basic prices", the final price depends on the duration of the "romantic date" and the wishes of the client. Of course, the rooms are equipped with everything necessary for hygiene, and "workers" regularly undergo medical examination, at the expense of the state, by the way. Tired of centuries of fighting this social vice, in 1988 the Netherlands authorities simply took control of the sex industry, legalizing prostitution and imposing taxes on it. Only EU citizens can engage in this craft. 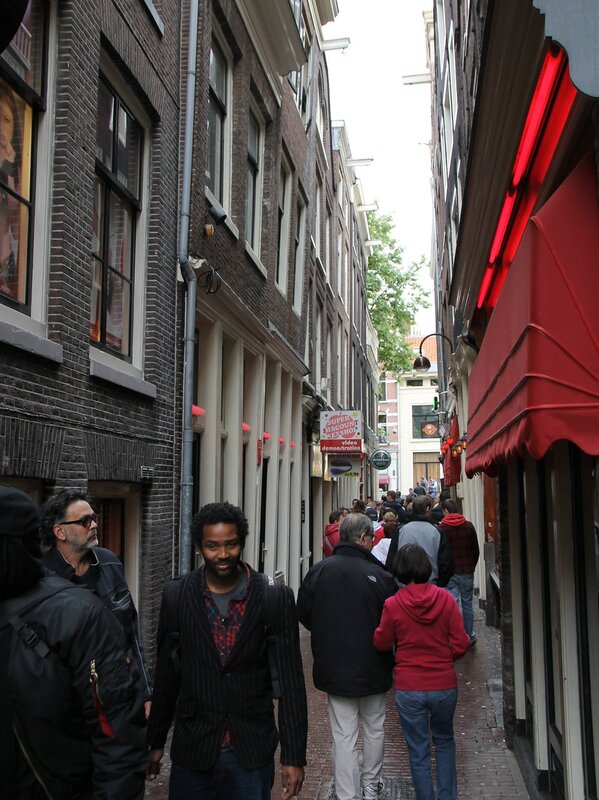 Above each window hangs a small lamp of different shades of red, this gave the name of the quarter. This is not a Dutch invention, as many believe the first mention of such a distinctive sign for a brothel refers to the port city of Sandusky that is on the shore of lake Erie in the United States. Now this term is called the areas of brothels around the world. A distinctive feature of Amsterdam that not all representatives of the oldest profession are fallen women who sell their bodies for a piece of bread. Someone is doing this "for the love of art" , or from boredom, as some housewives secretly from their husbands. Among the youngest are many students who work part-time in their free time. Therefore, it is forbidden to photograph the windows with the girls, the security services are vigilant for the anonymity of their workers, and it is not recommended to contact them, since the police will take their side in case of a conflict. 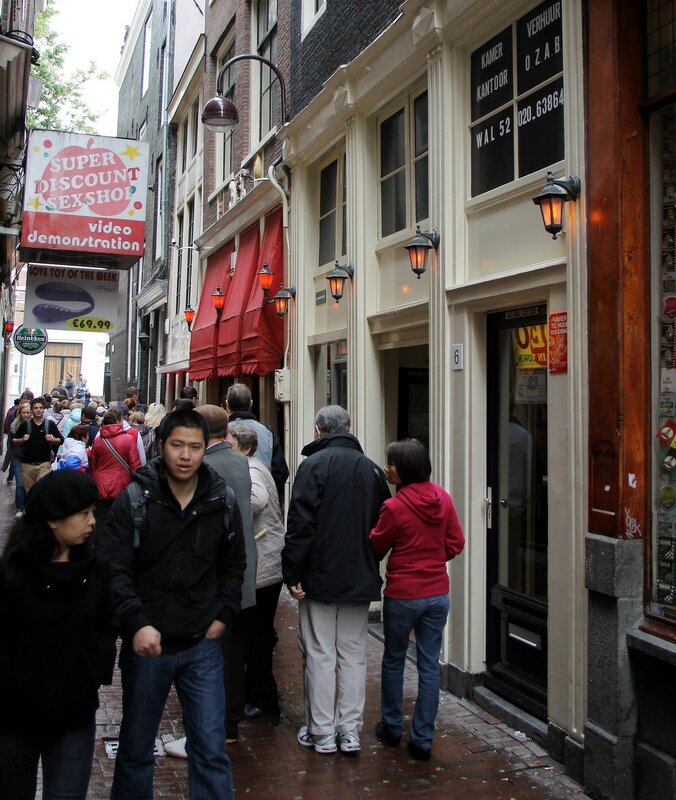 In the northern part of the "Red light district" is Oude Kerk, ("Old church"), 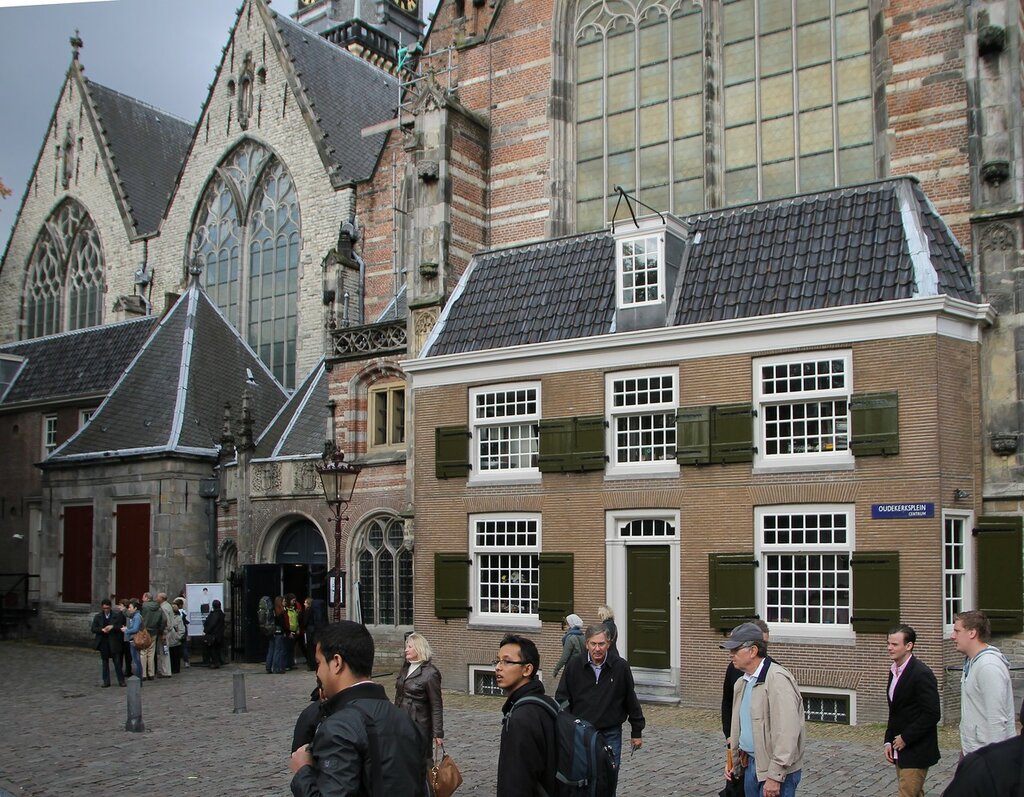 which is surrounded by the square Oudekerksplein, here you can look at a couple of famous monuments. 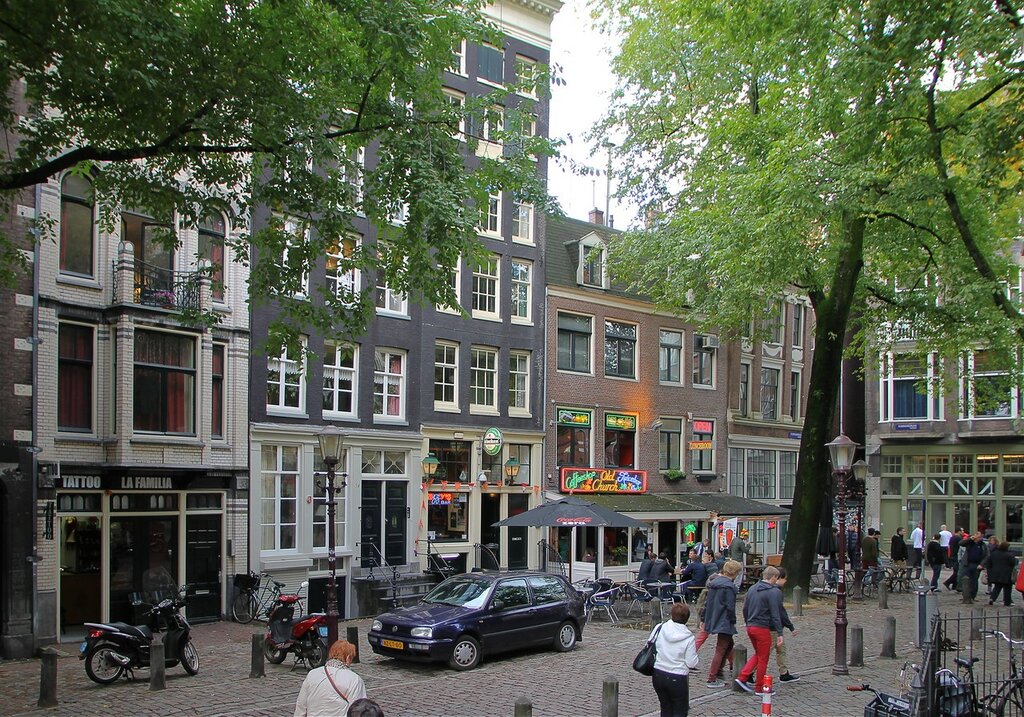 Opposite the southern facade of the Church among the cobblestones of the pavement, you can find a recess with a bronze bas-relief depicting a hand caressing a woman's chest. The sculpture Borstplaat (literally "Board with chest") appeared here one night in 1979, the author wished to remain unknown. Despite the fact that the monument instantly became popular, municipal the authorities have decided to remove it. It was formally announced that the alleged disassembly of the bridge violated the sound insulation of the basement under it. Although, in fact, the authorities went on about the religious and cultural community, which considered such a plot blasphemy at the entrance to the oldest Church in Amsterdam. When they tried to dismantle, it turned out that it is not so easy-the bas-relief had a solid concrete foundation. An anonymous sculptor, having learned about the attempt to demolish his creation and the reasons for the demolition, gave the city utilities a draft of the Foundation with recommendations for sound insulation. By this time, "The Chest" has become so popular among tourists that the authorities decided to leave the monument in place, limited to sound insulation of its base. In some places you can find information that the author of this sculpture is a British Illustrator of children's books Robert Hodgson, but he never confirmed, and officially this creation is considered anonymous. 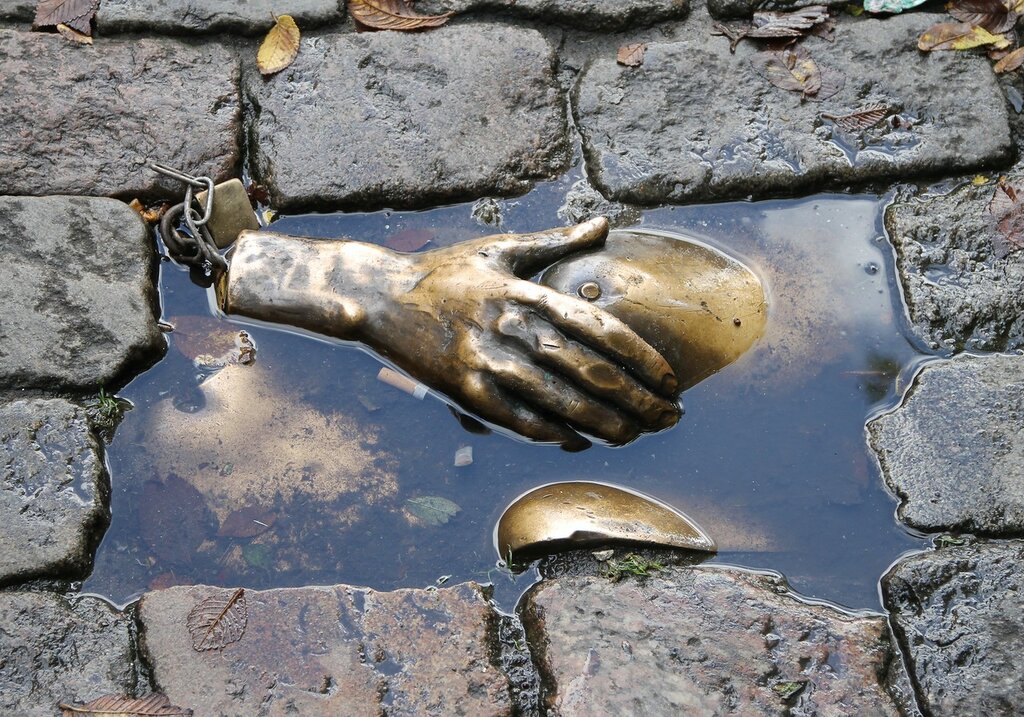 In front of the Western facade of the Old сhurch is another popular tourist "theme monument" - "The Belle" (prostitute). The monument was established in 2007. 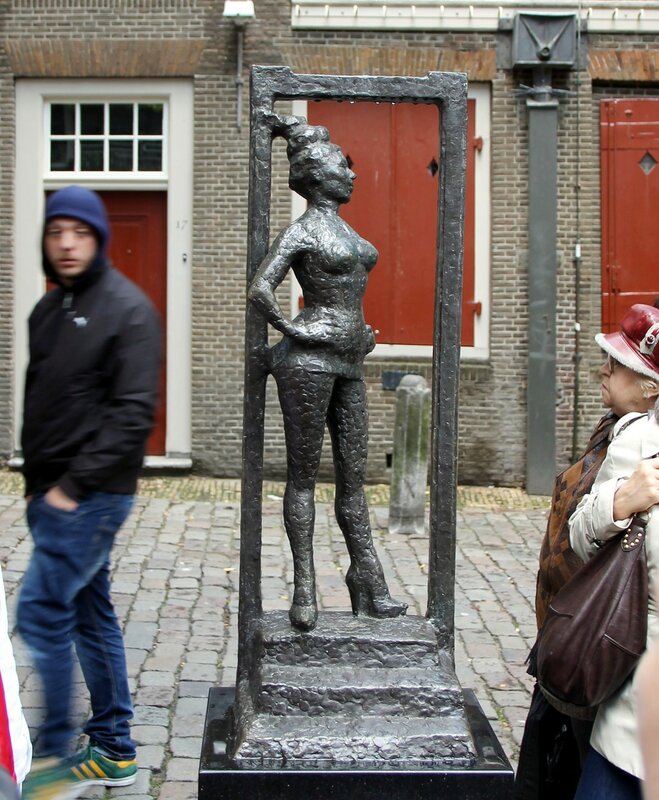 Sculptor Els Rijerse depicted a prostitute standing in the window. On the pedestal is written "Respect sexworkers all over the world". 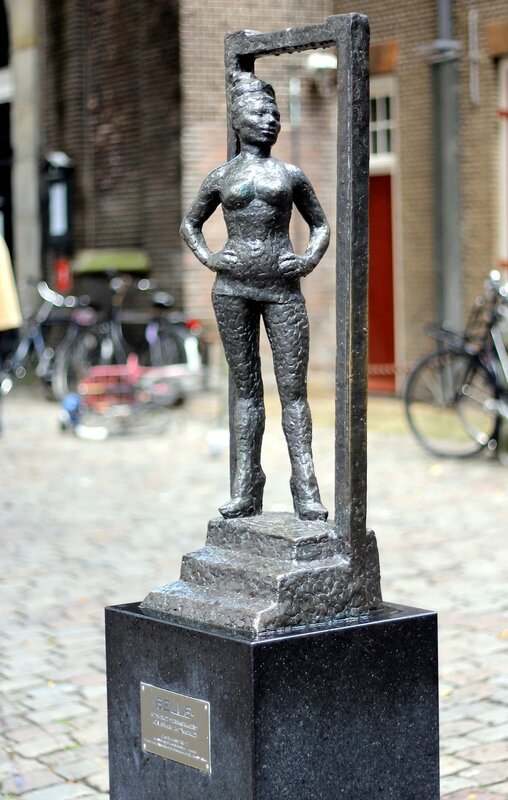 The Oudezijds Voorburgwal canal divides the area into two halves, once it was part of the port and here were moored merchant ships. As you know, sailors after a long voyage have a great demand to the women's society, and along the channel began to settle women who earned their living. It was not the only center of debauchery in Amstrdam, such services were provided on the waterfront of the Flower market, as well as in the De Pijp quarter, where artists and other Bohemian audience lived. 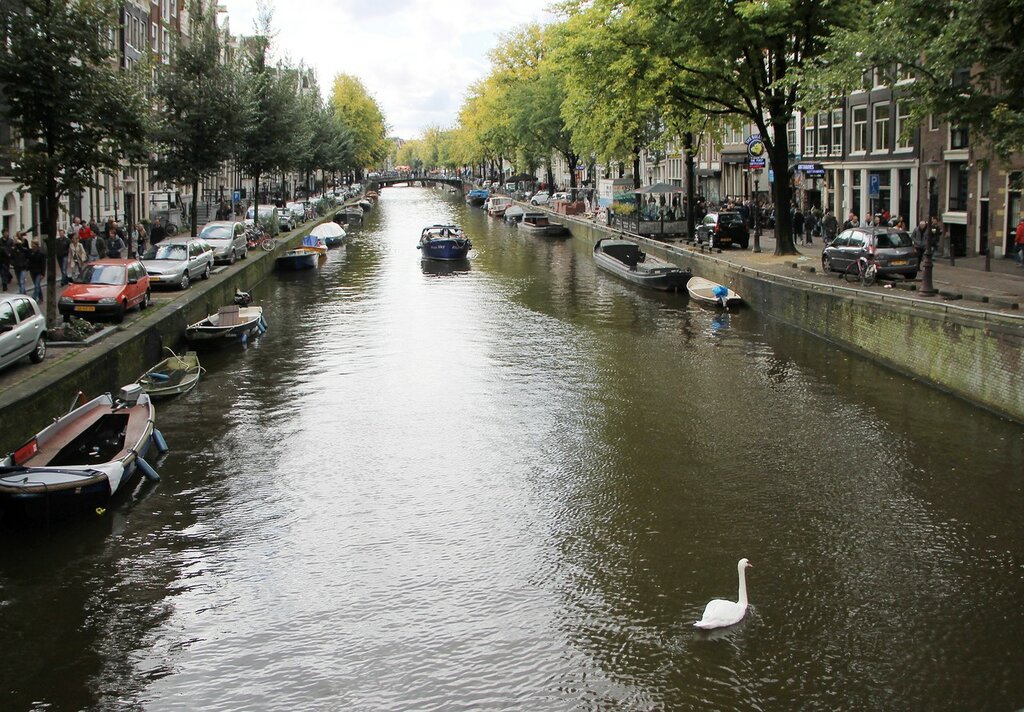 Now selling love is concentrated in the streets perpendicular to the channel, but here you can see the apartments, the purpose of which is said to be red stripes on the windows. 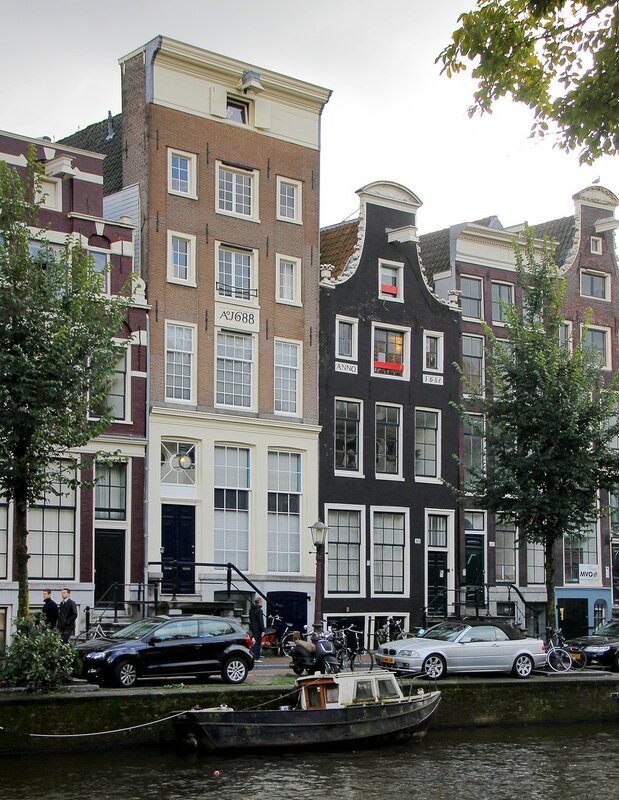 Basically, on the banks of the channel are spectacular places-erotic shows and cinemas with a specific repertoire. 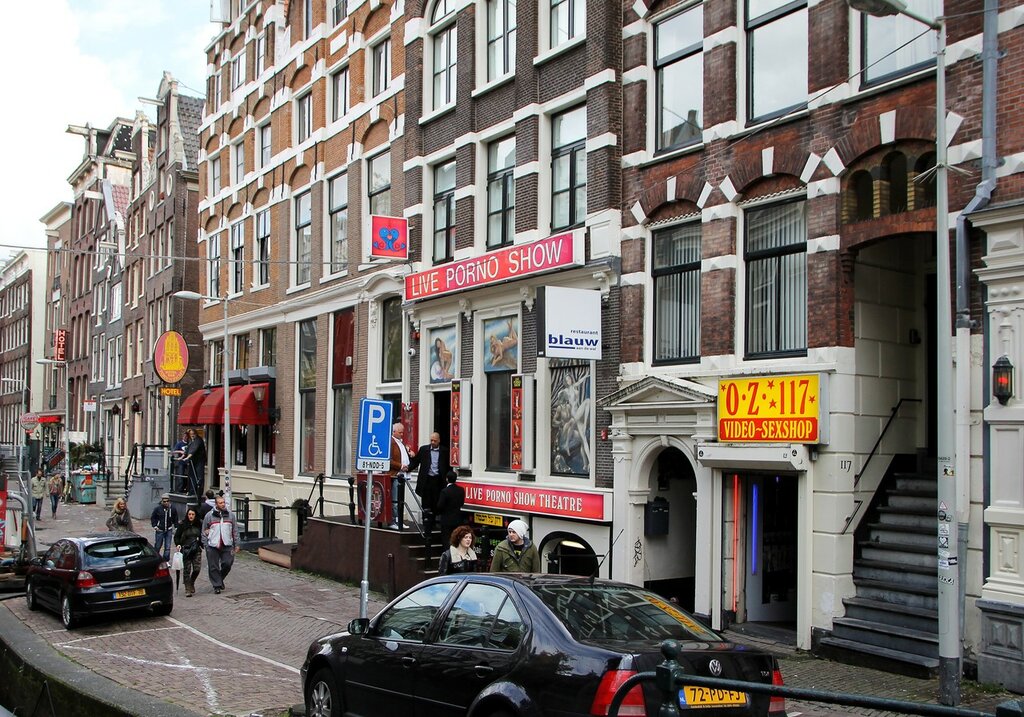 There is even a large theatre Casa Rosso. 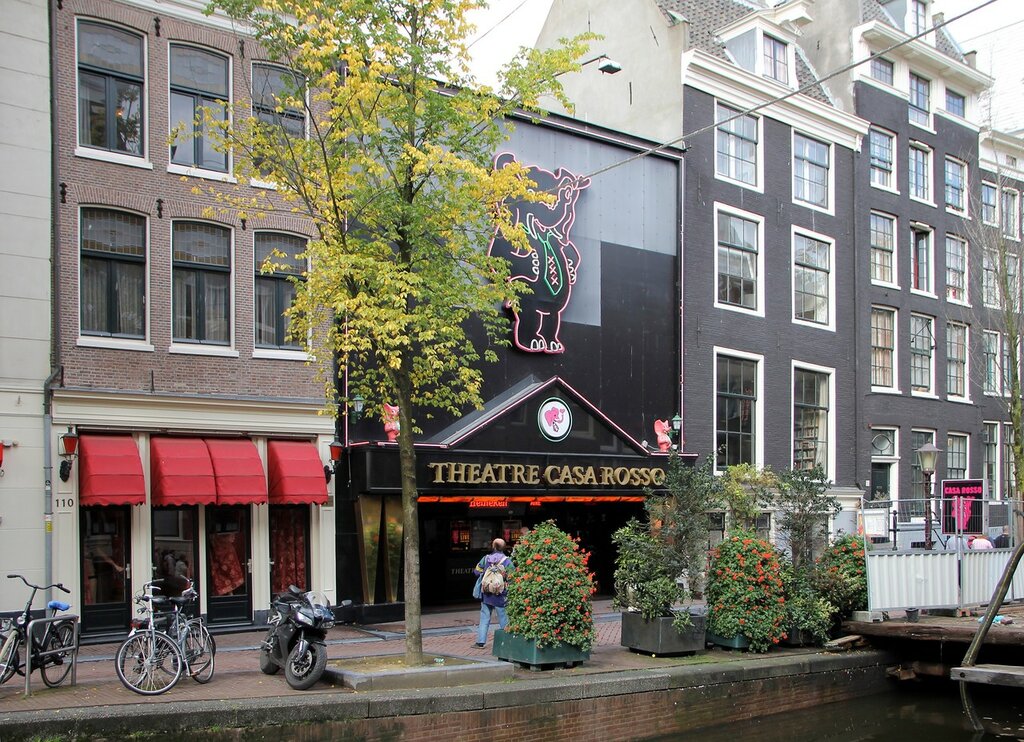 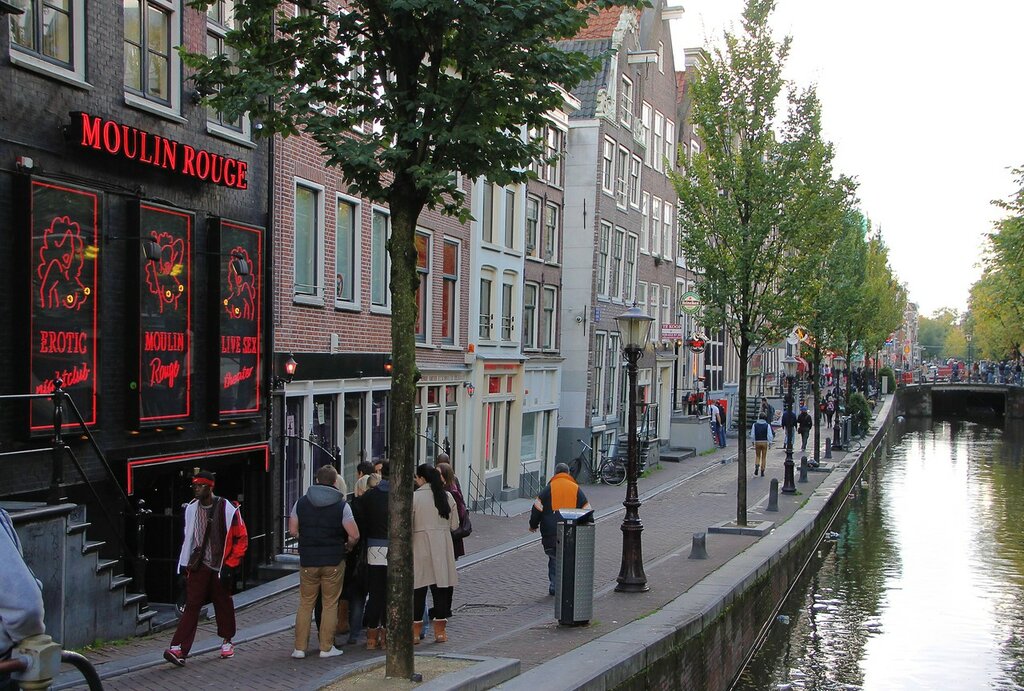 Souvenir shops and art galleries in the quarter are also different from the usual kind of range. 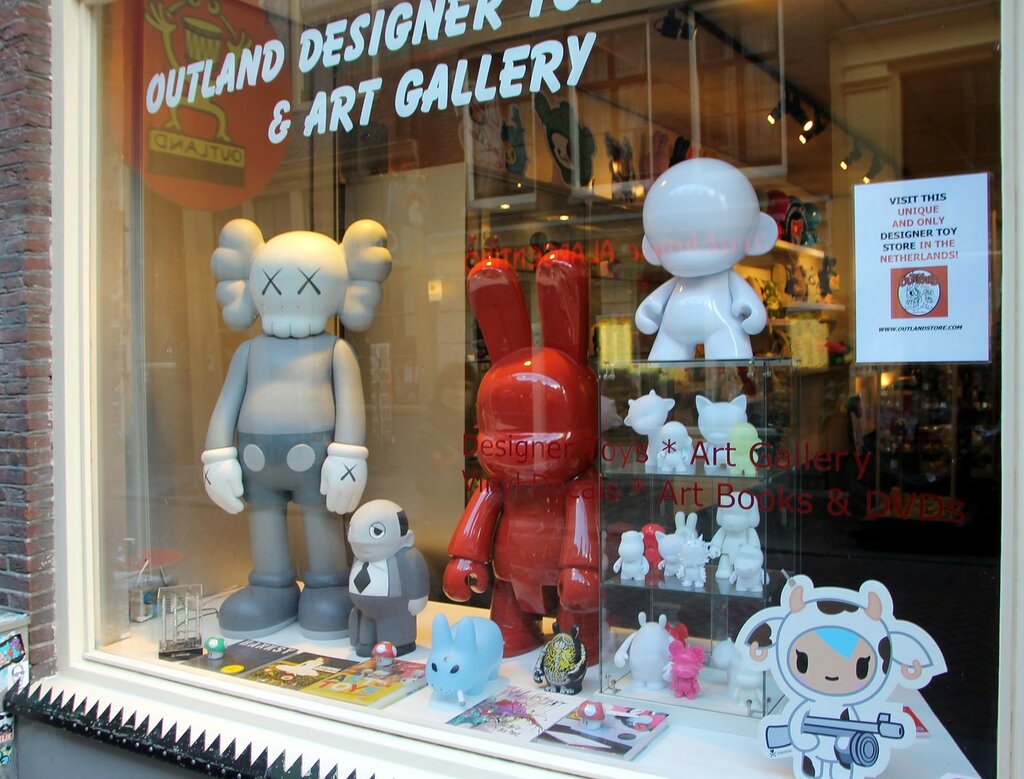 Of course, in such a quarter you can find a lot of institutions under the General name "Coffeeshop" , where it is legal to get another kind of pleasure-to smoke marijuana or taste "space cakes" with hash. 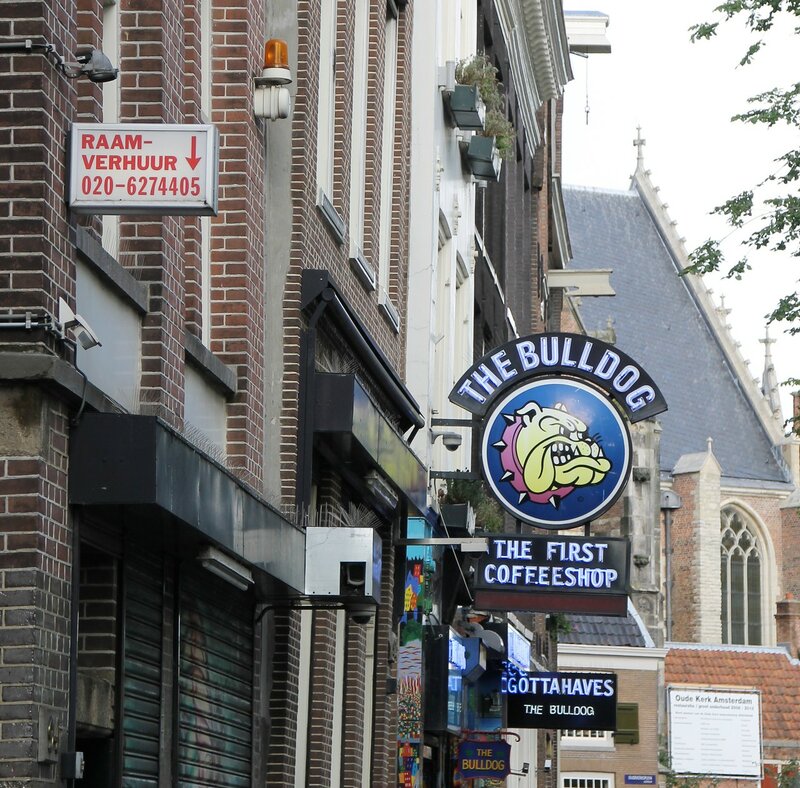