Our ferry "Princess Mary" left the terminal St. Peter Line astern and port tugs turned her nose to the Sea channel. The entrance to the channel is marked by a high mast, which is equipped with a radar station "Nevsky gate" and a laser swing lighthouse of the ship's fairway. 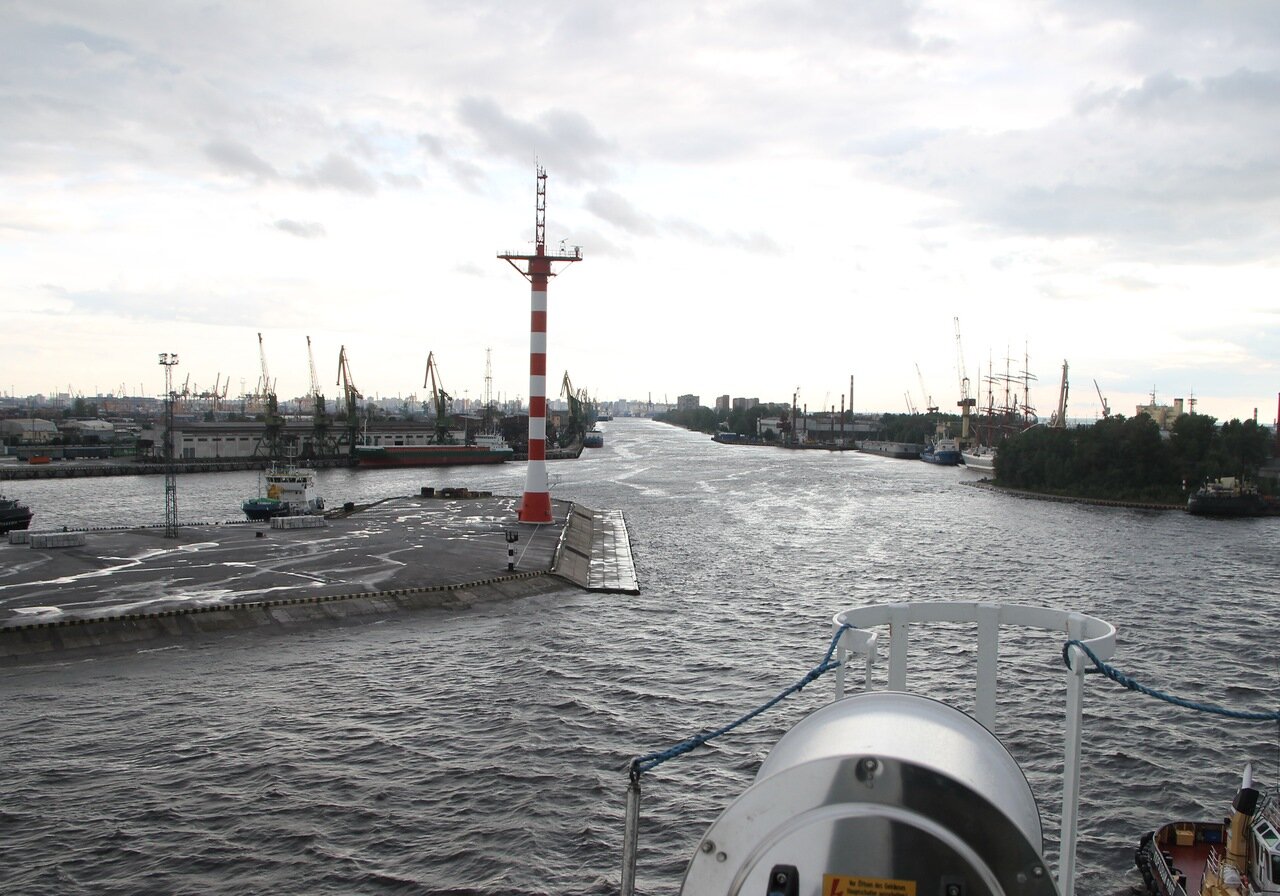 To the left of the lighthouse are the docks and warehouses of the first port district and Gutuevsky harbor, often called "Gutuevsky ladle", where port tugs and other technological vessels are located. 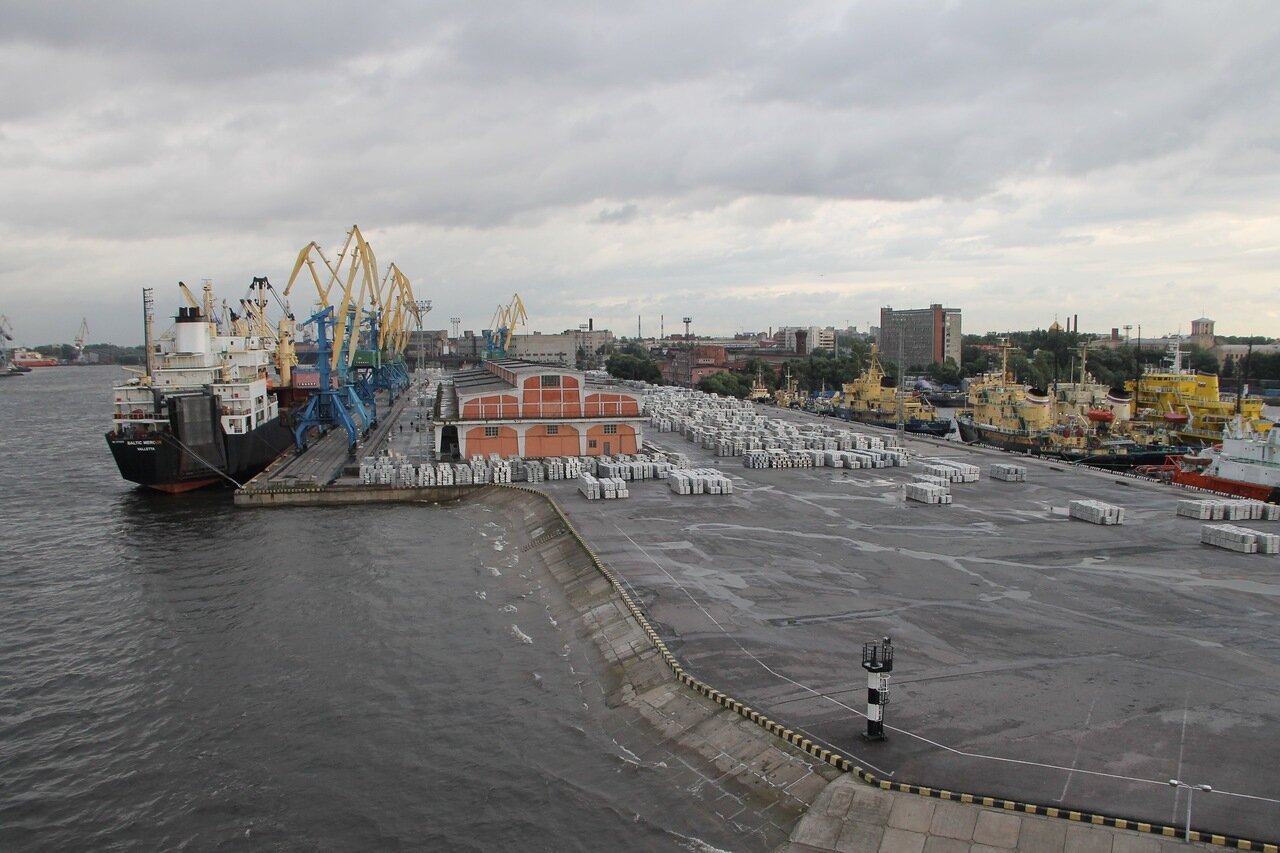 Behind Gutuevsky harbor, you can see giant mountains of scrap metal, here they are unloaded from cars and loaded onto ships for export. 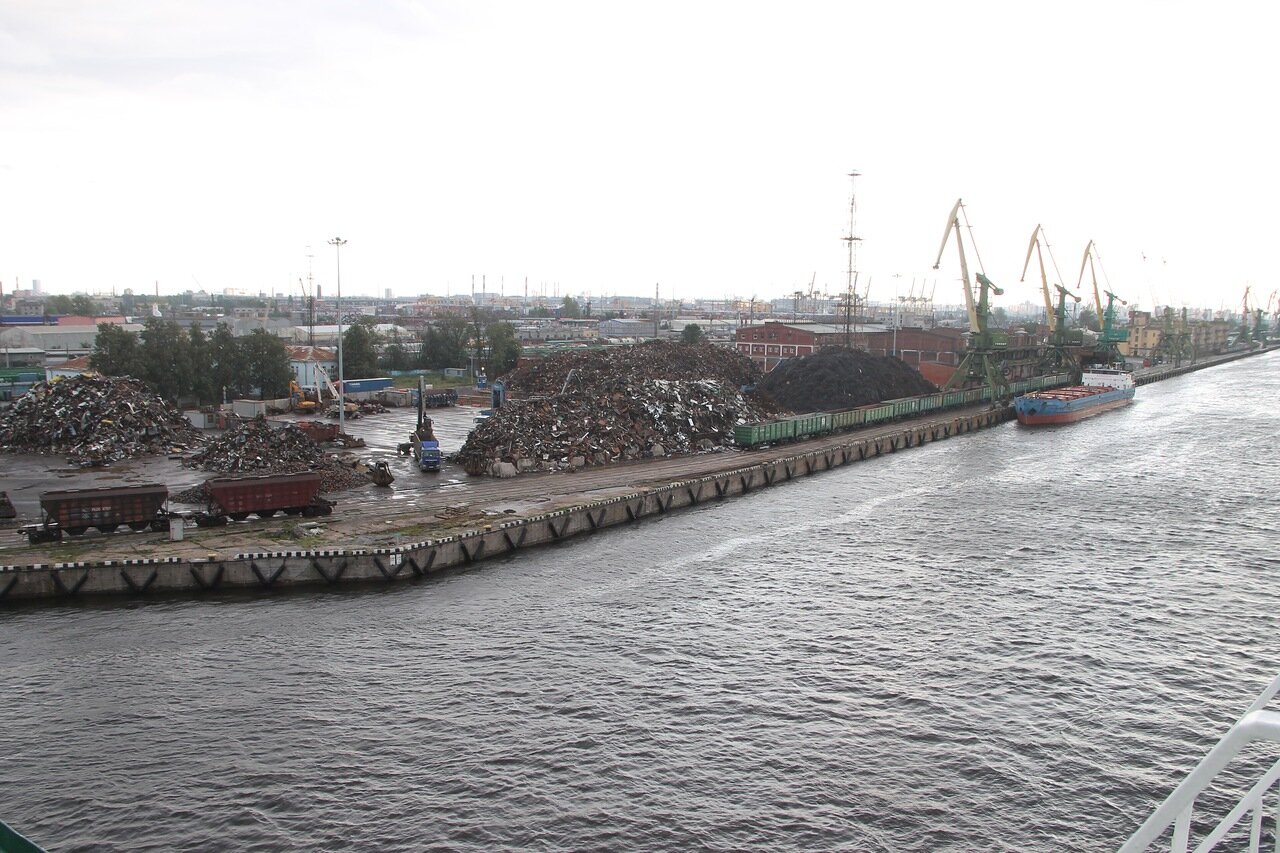 To the right on the course is the northern tip of Kanonersky ("Gunboat") island, occupied by a ship repair plant. Today, the famous Sedov barque, the world's largest sailing training vessel, stands at the factory pier. 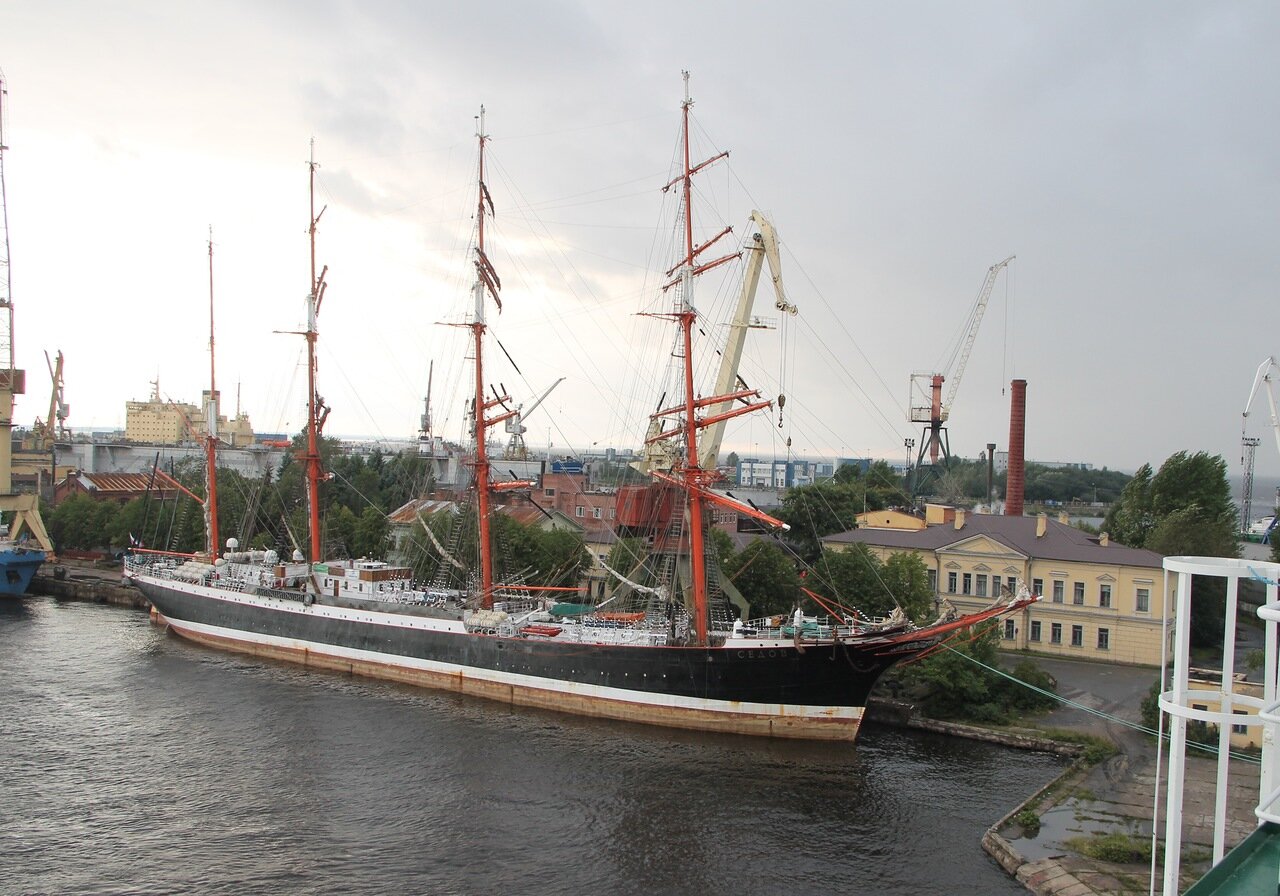 Behind the ship repair plant is a residential area that was once a factory settlement, isolated from the city. it was accessible only by water, by river trams. In 1983, a road tunnel was built under the canal and buses started coming here. The village is located on the bank of the Neva Bay and is open to all winds, there is high humidity, poorly tolerated in the heat, and terrible dankness in winter. All the more surprising that the residents of the "Kanonerka" love their quarter and do not want to leave here for anything. Now the population of the district is about 4.5 thousand. there are several multi-storey residential buildings here. A couple of houses built in the 70s with huge windows are clearly not suitable for the Baltic winds (to make the designers live here), the later ones already have a more suitable architecture. 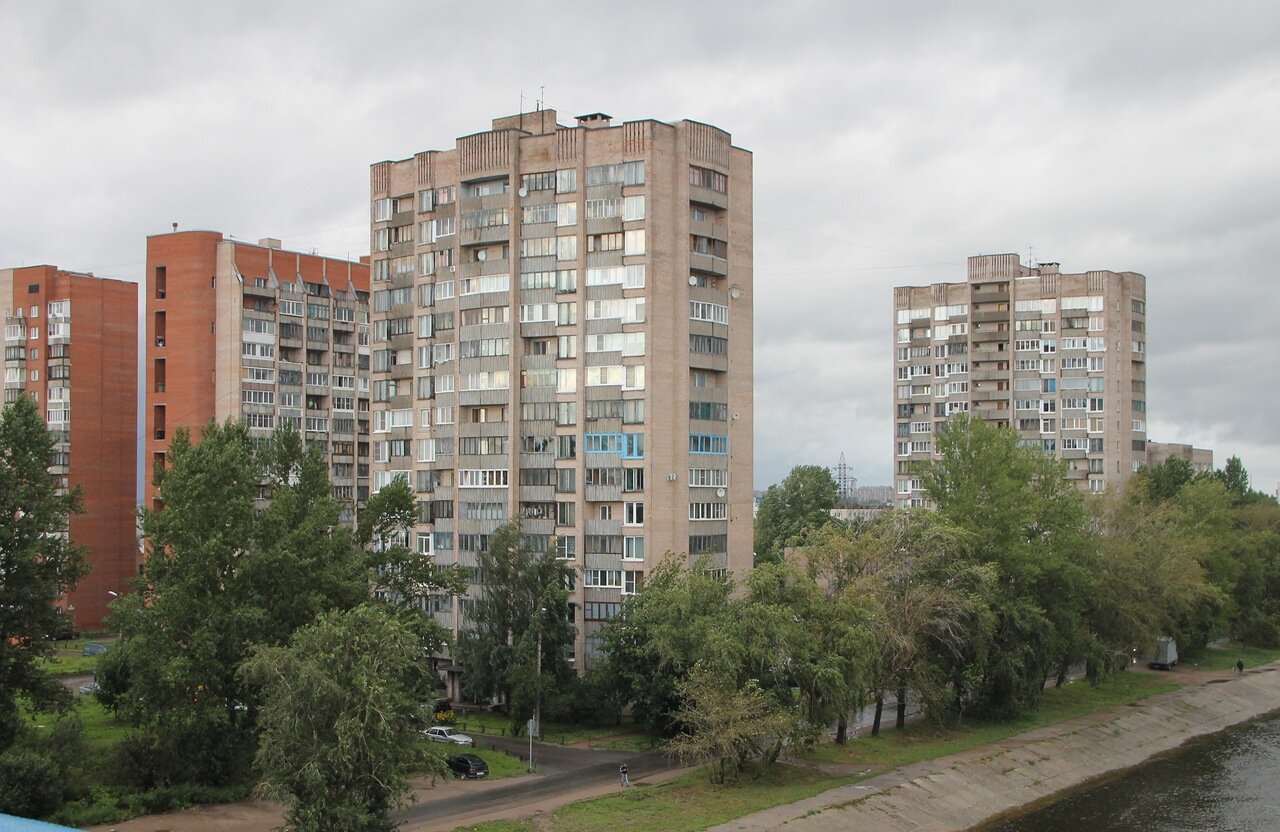 The severity of the local climate is confirmed by a very strong wind, so the wiring through the Channel of our ship, which has a huge sail capacity, is carried out using tugs. 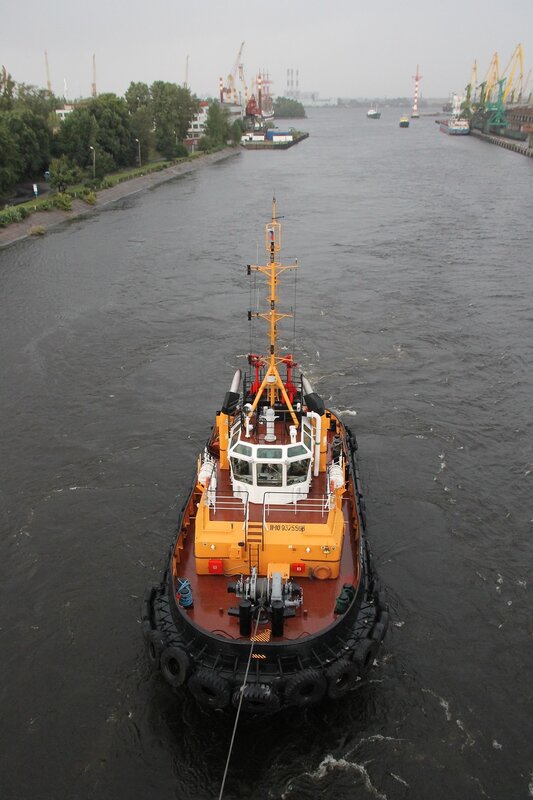 In addition, it rains periodically, driving me and other tourists under the awning of the bar on the aft deck. The wind flutters the Maltese flag, under which the "Princess Mary" is "hiding" from taxes. 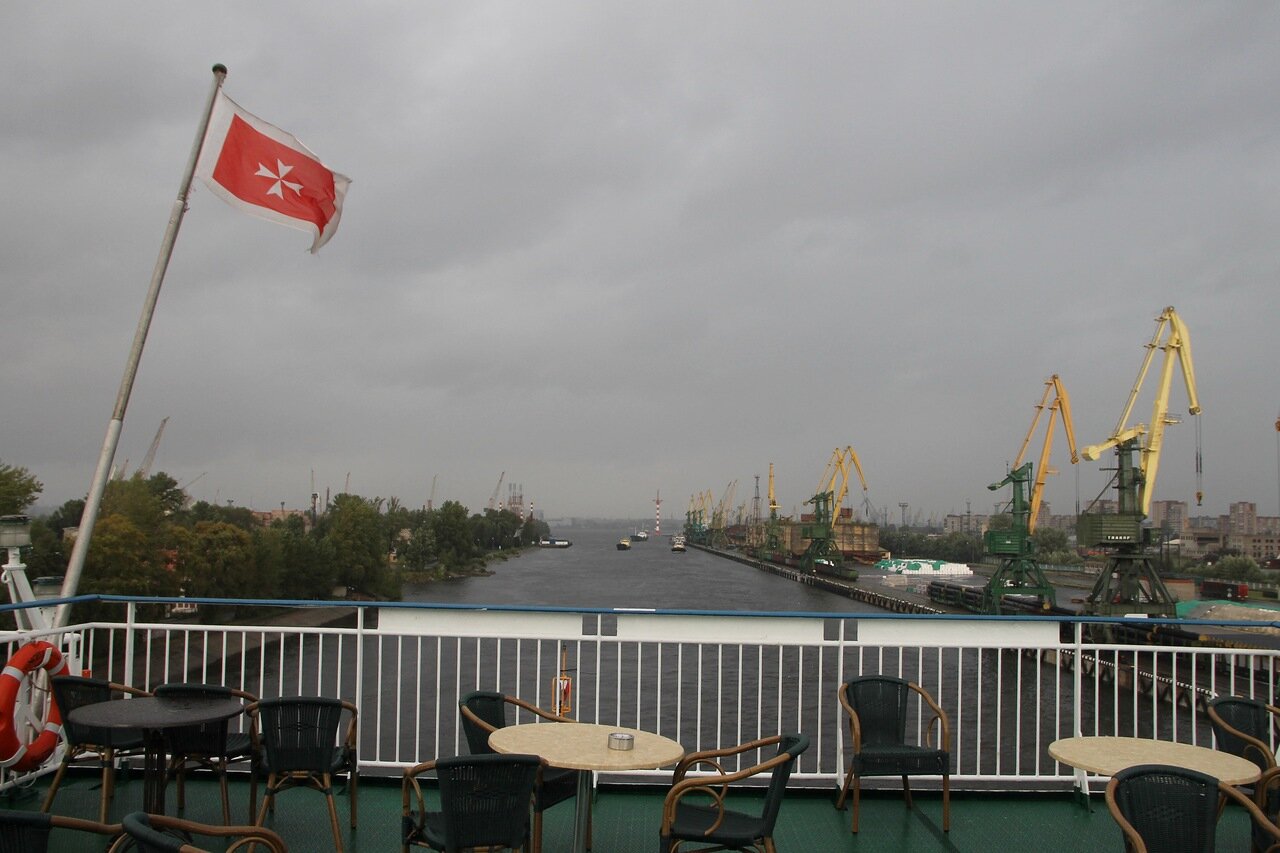 The narrow part along the docks of the port has been passed, and the tugs are leaving us. 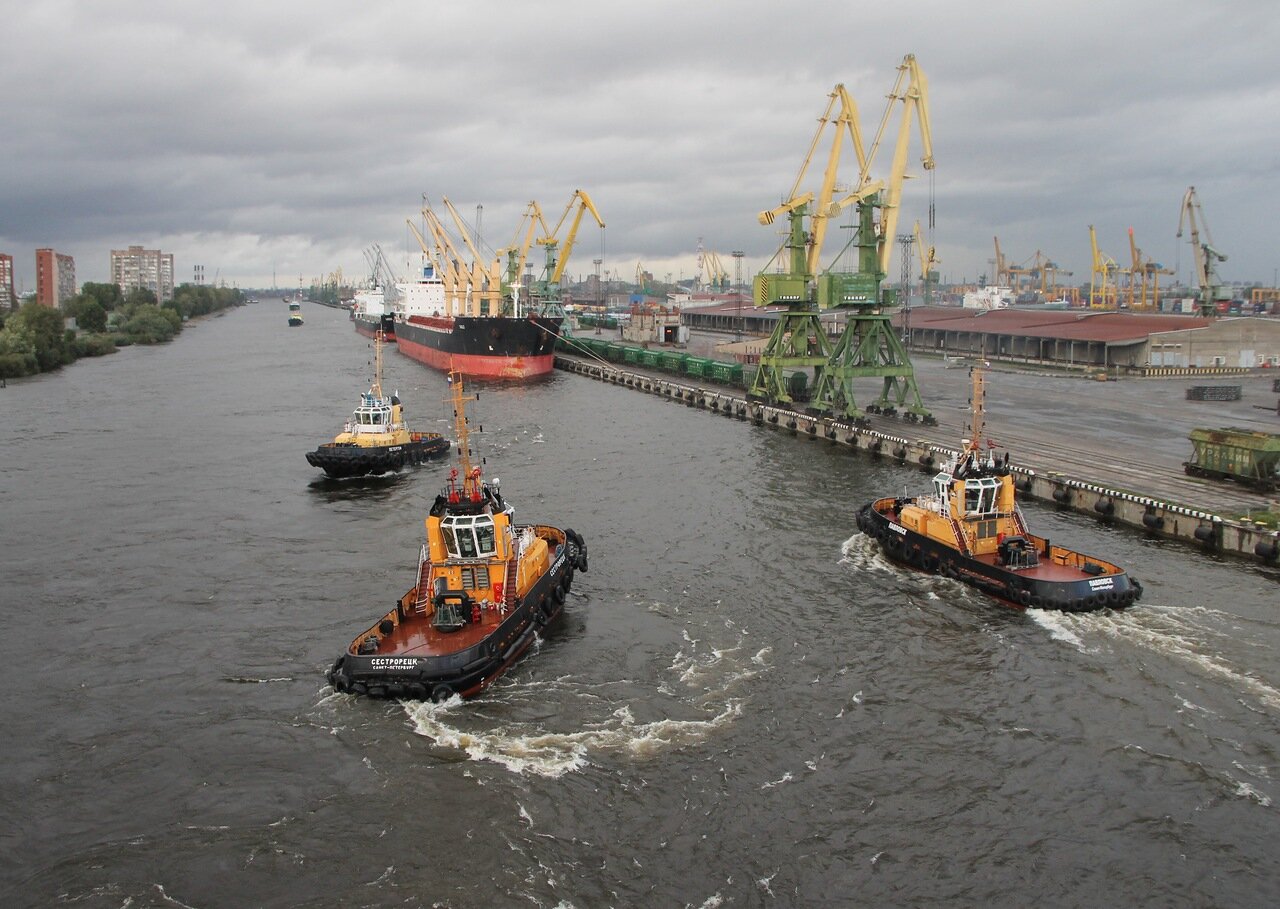 At one of the berths, the Mudyug icebreaker is resting in anticipation of winter, serving the fairway in the Neva Bay. 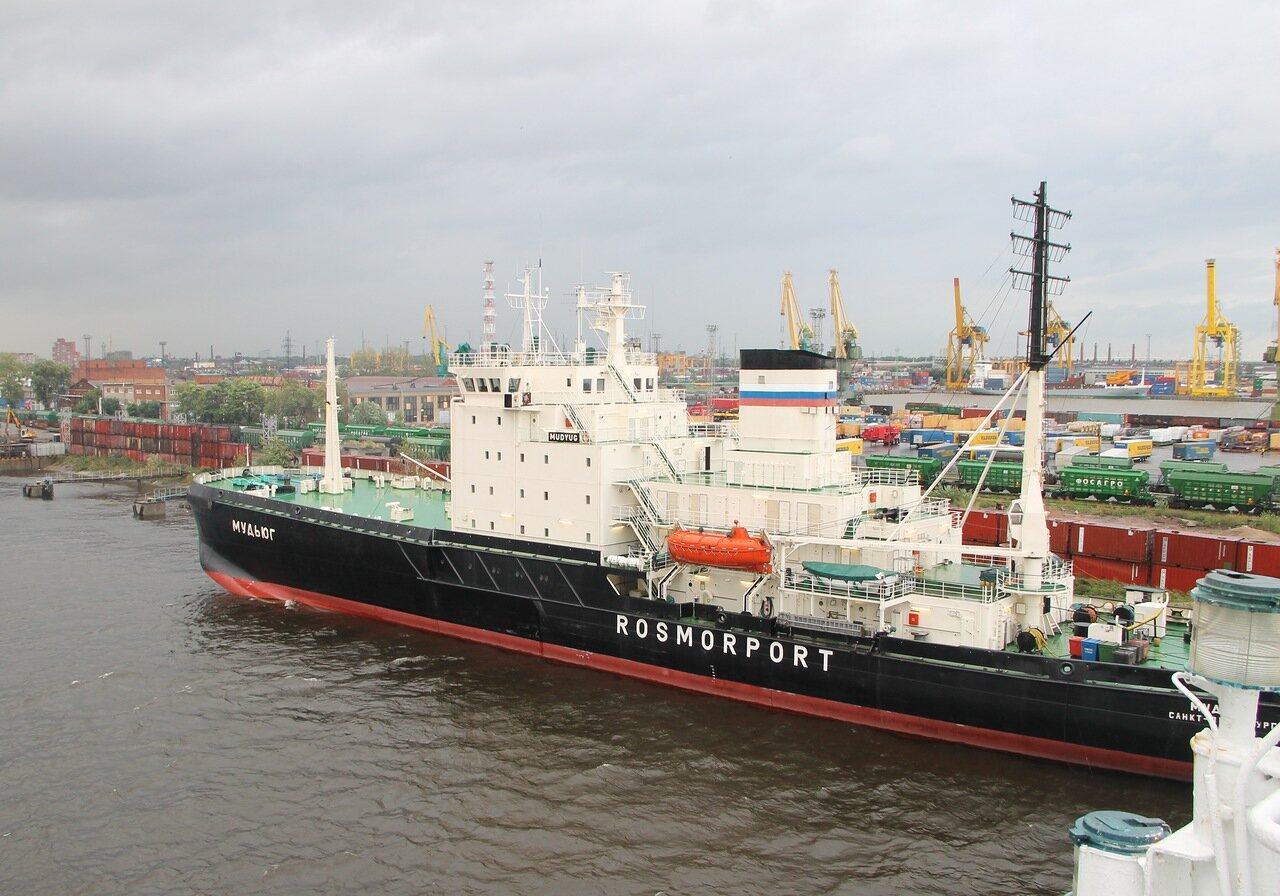 Behind the stern was Gutuevsky island, which now houses most of the New port. In its natural form, the island was part of the Neva Delta, a swampy area with many channels, and on the plan of St. Petersburg in 1717, it was designated as Uninhabited. In the middle of the 18th century, the owner of the island was Olonets merchant-shipbuilder Guttuev, since then the island began to be called by his name, and over time it moved to the map. In the second half of the 19th century, the piers on the Neva river embankments could no longer cope with the increased cargo traffic, and the draught of large sea vessels allowed them to reach only Kronstadt, where goods were transported to St. Petersburg on small barges. At the end of 1873, a seaport was built here, which was connected to Kronstadt by an artificial fairway with a depth of 6 meters. The author of the channel project was a well-known engineer and entrepreneur N. I. Putilov, who also received a contract for construction. 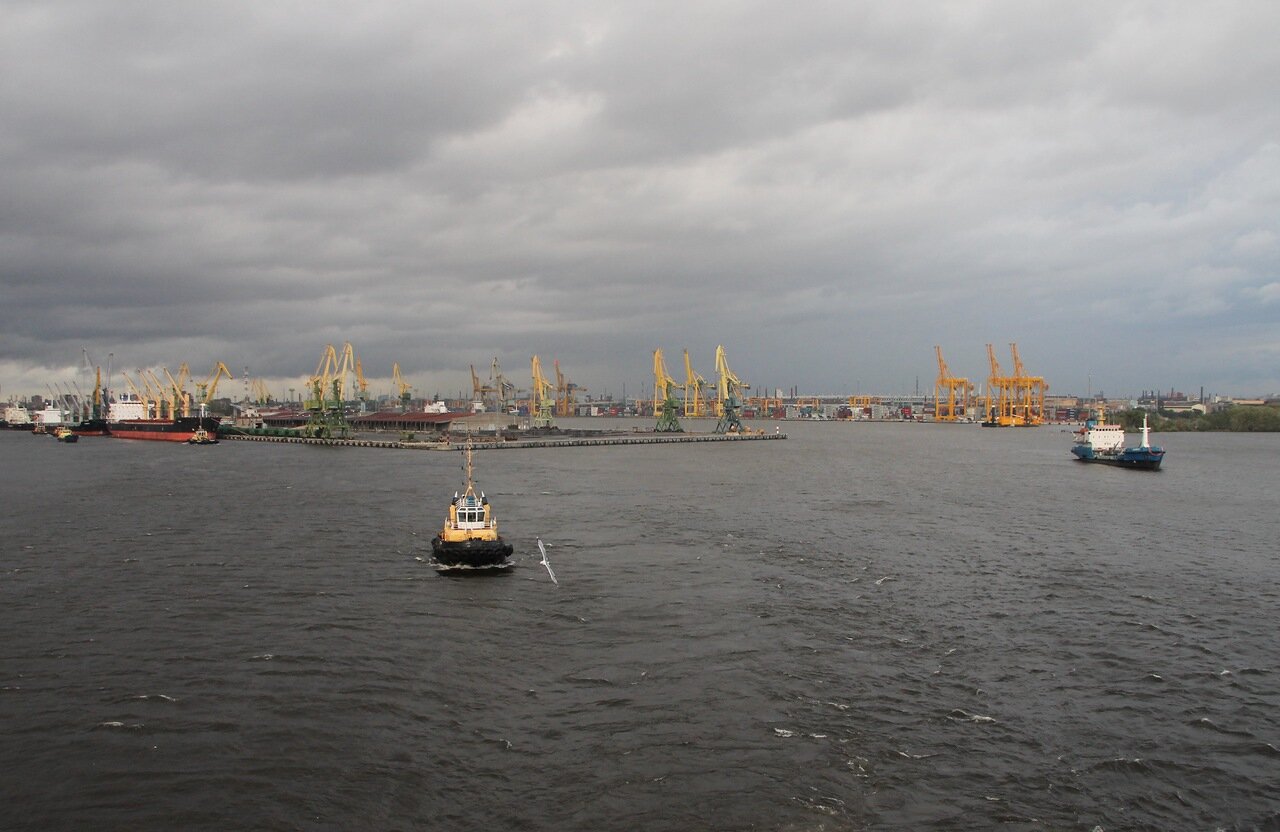 To the south-west of the island is the roadstead of the Forest mole, which separates the First container terminal from the New port. Previously, there were stacks of logs, but now everything is filled with standard steel boxes, which made a revolution in freight transportation. 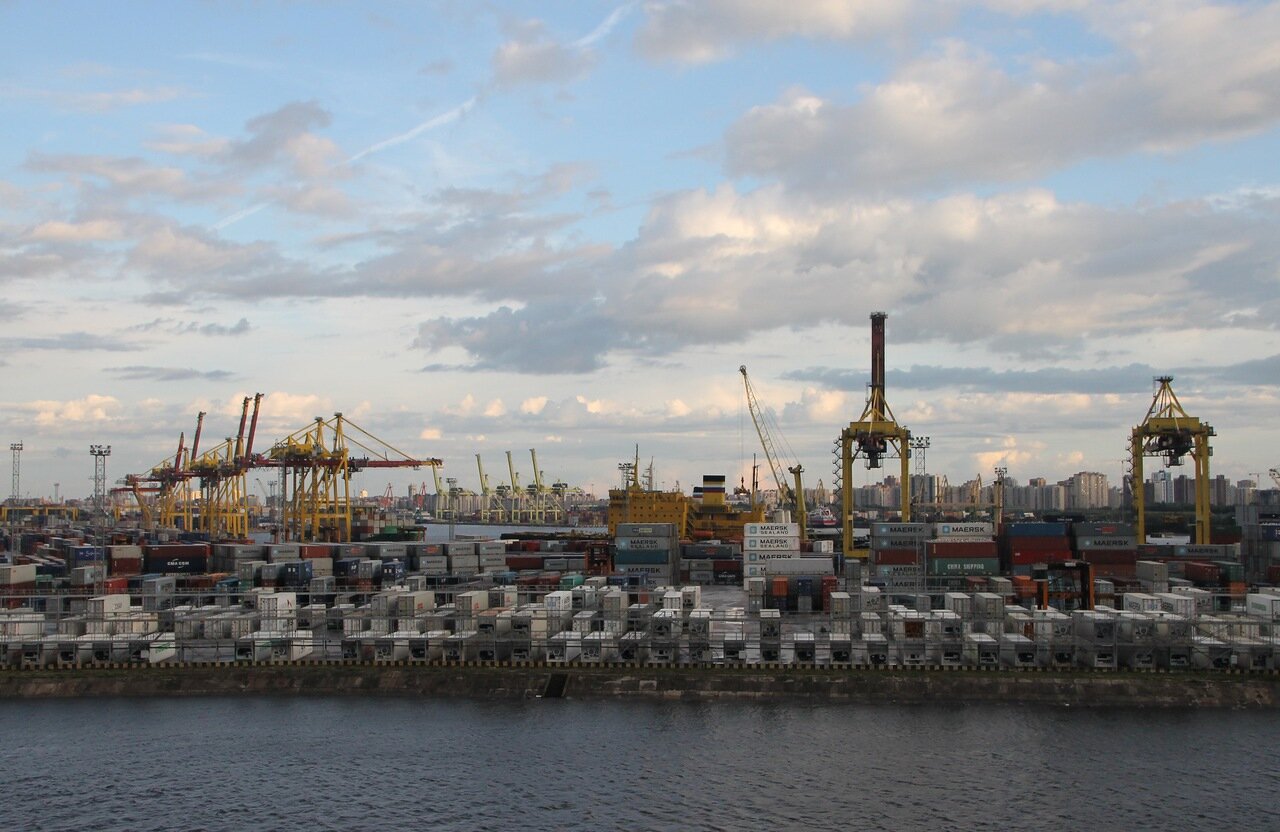 The first container terminal started operating in 1998 and is the largest in the former Soviet Union. 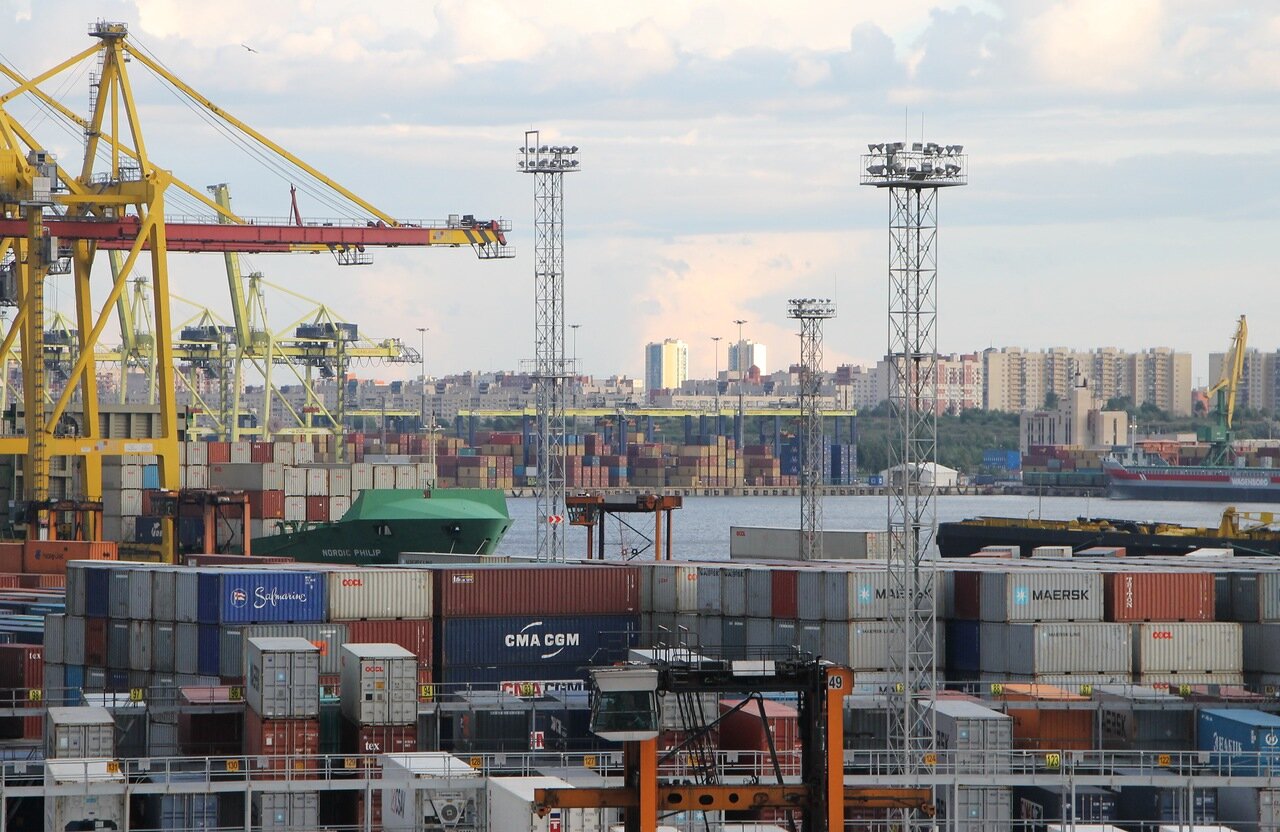 The terminal is connected by direct feeder lines to the most important container ports in Western Europe: Rotterdam, Hamburg, Bremerhaven and Antwerp. 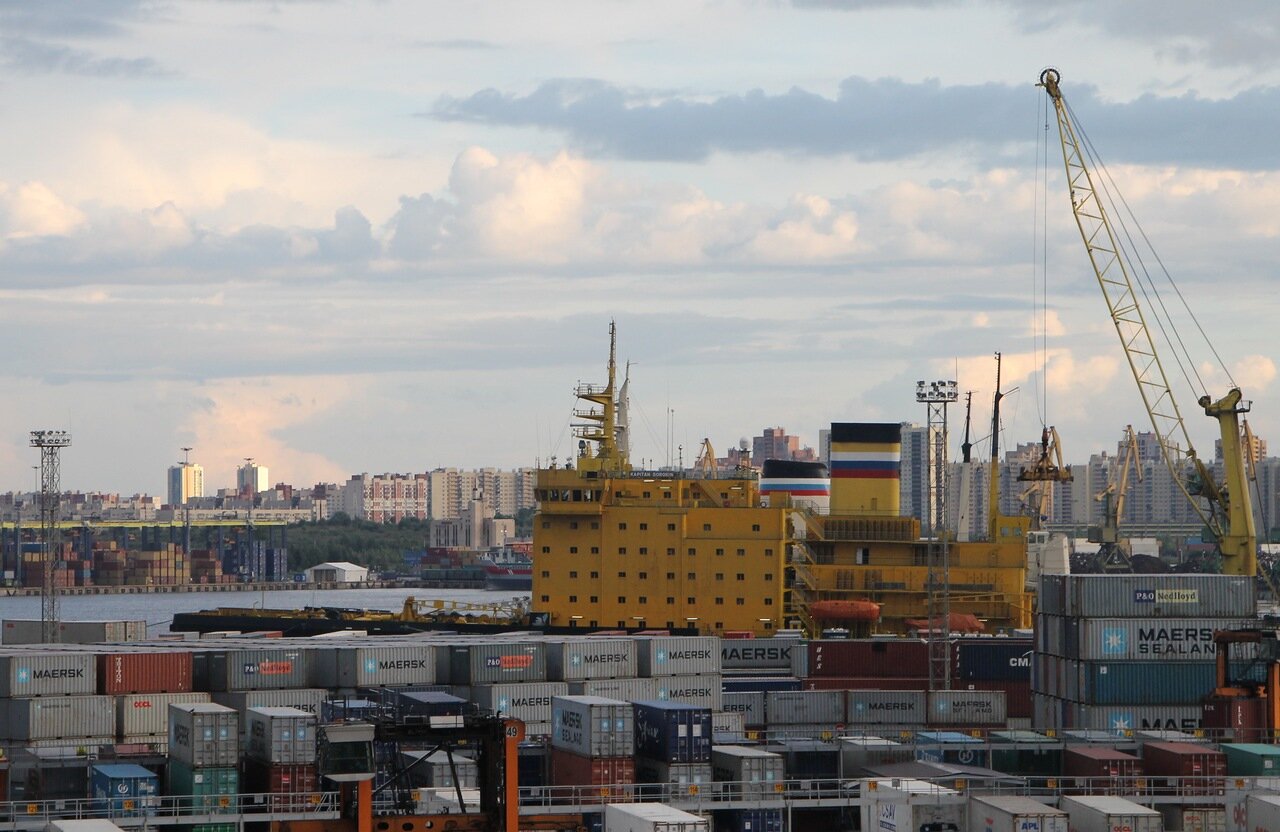 The northern part of the terminal separates the Sea channel from the Coal harbor. Here is the building of the port Manager and the sash lighthouse. 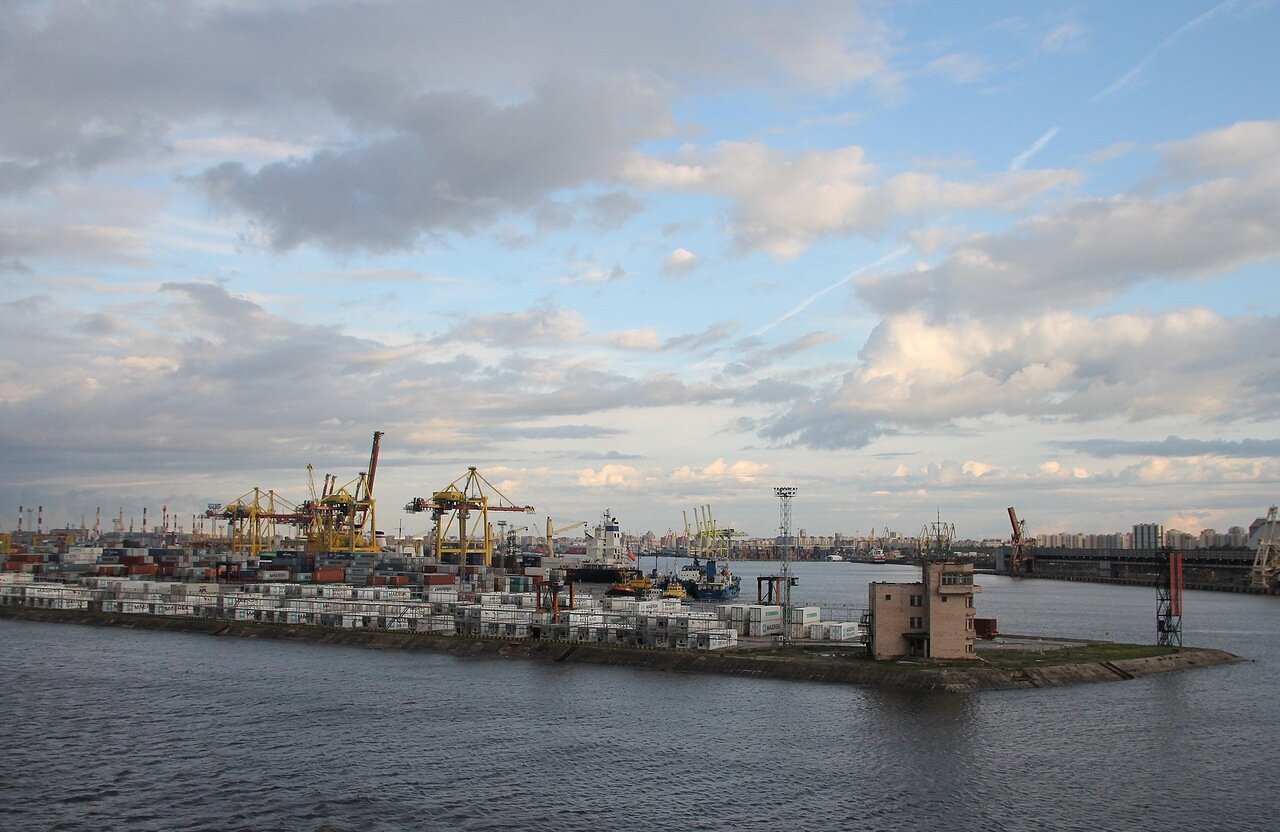 The coal Harbor used to supply the city with fuel, and now it also has container sites and a Fishing port on its docks. 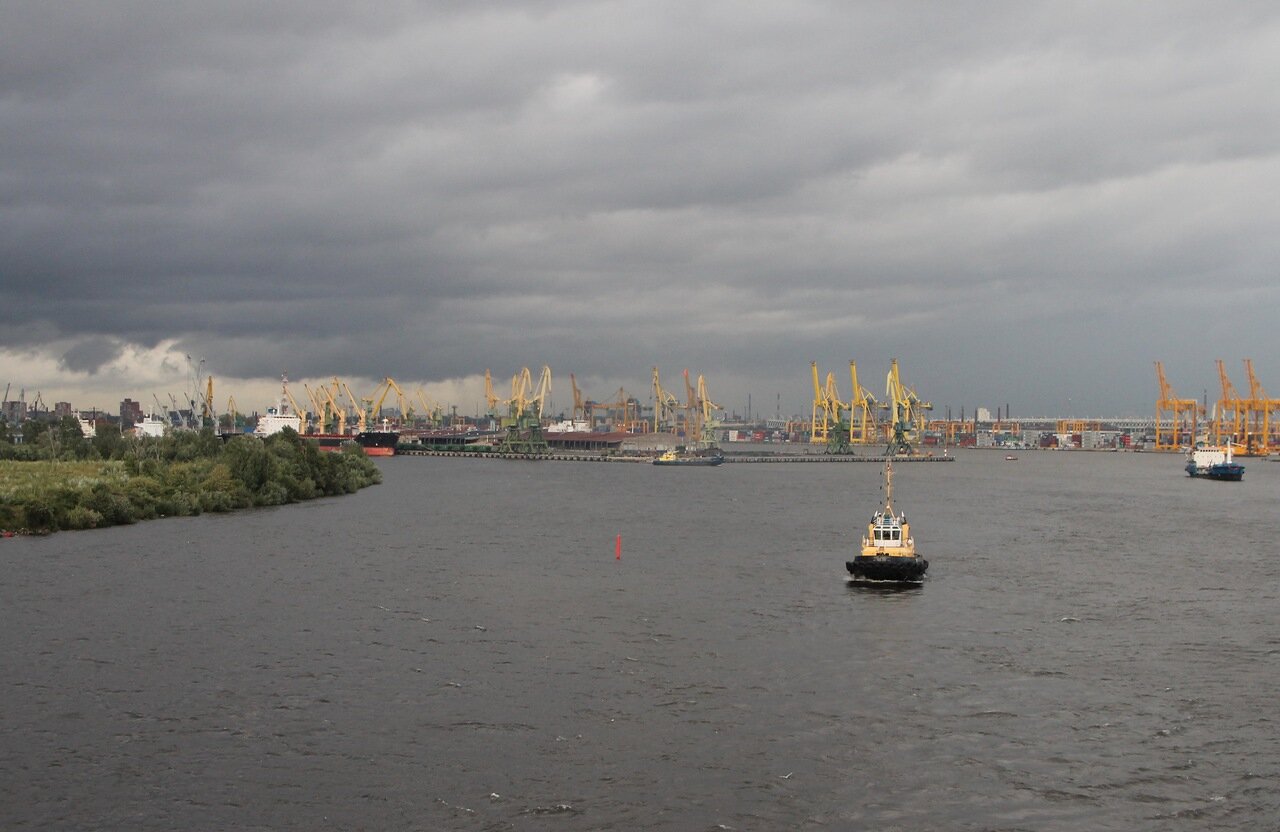 On the starboard side, the Kanonersky island becomes the Kanonerskaya spit, a chain of islands turned into an artificial pier that protects the port from the bay. Most of the pier is slightly wider than 20 meters. Over time, the embankment was overgrown with forest, now it is a place of summer recreation for lovers of privacy. 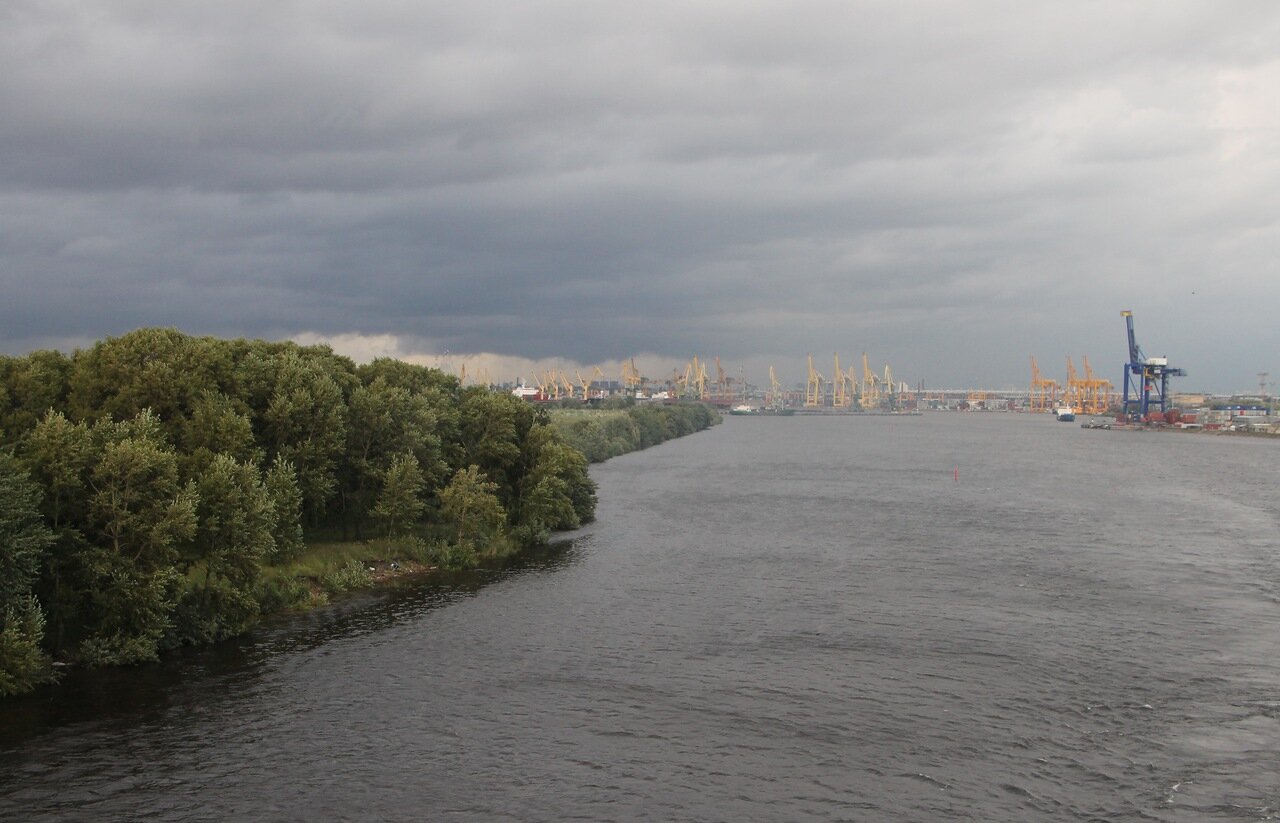 We pass the Sea gate, which is also called "Golden". 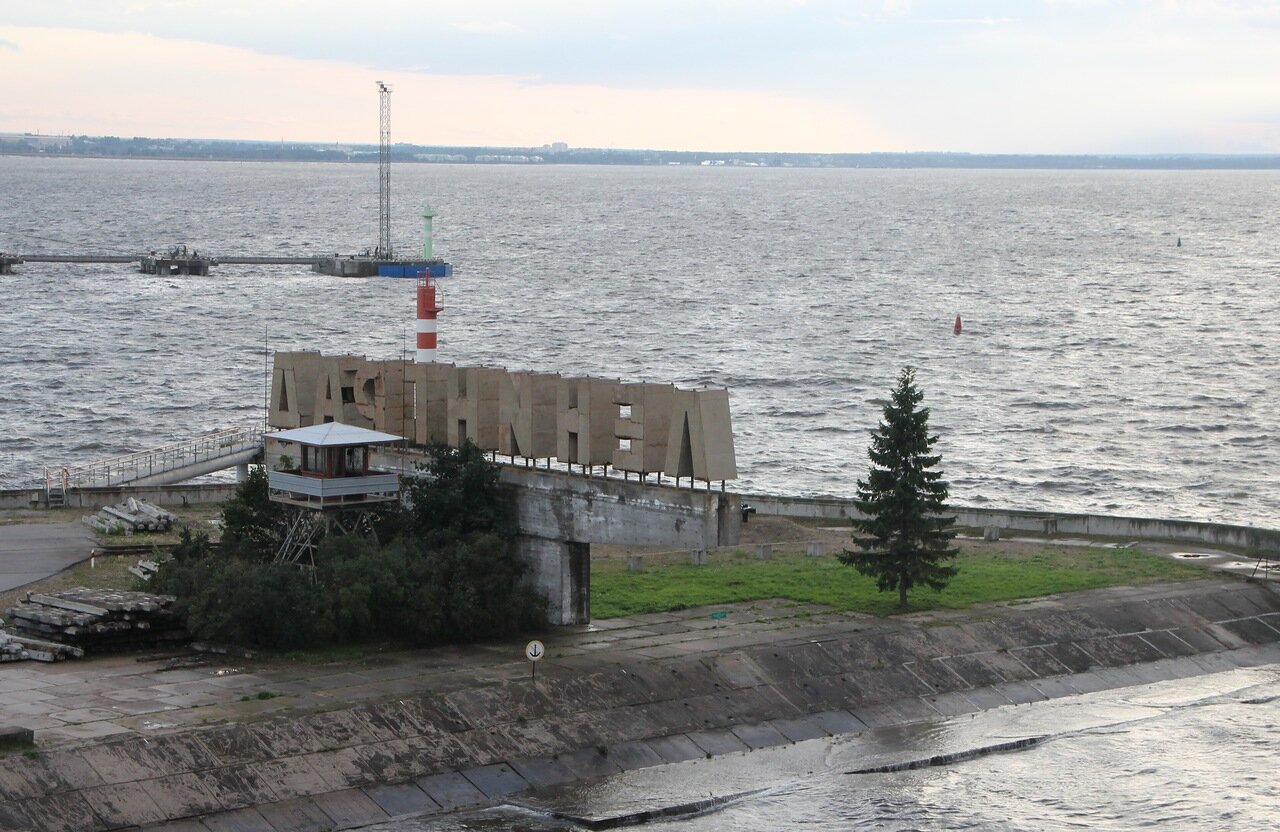 Sea border of the Northern capital of Russia. 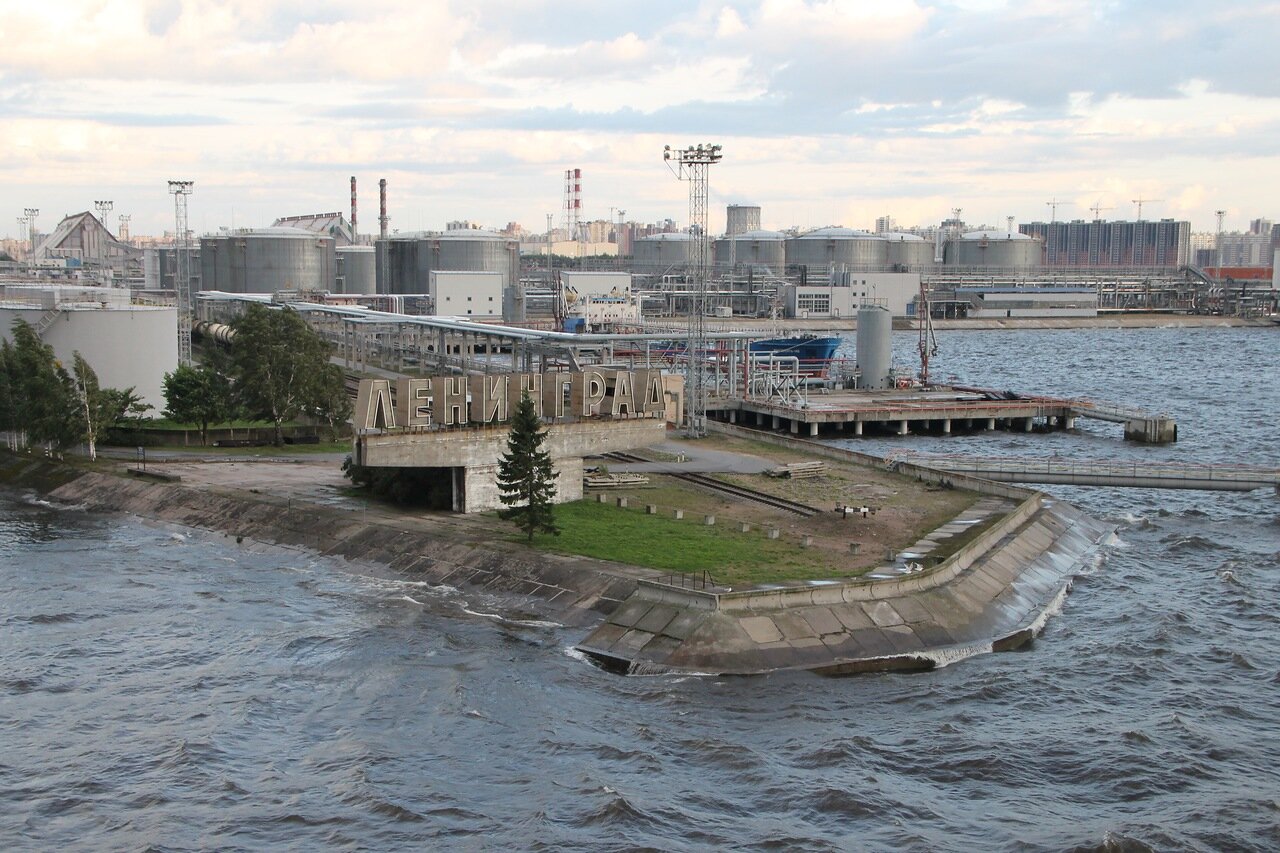 Large concrete letters "Leningrad" remind of the Soviet name of the city. Right behind them are railway tracks with many tanks and huge storage tanks for oil products at the Oil terminal. 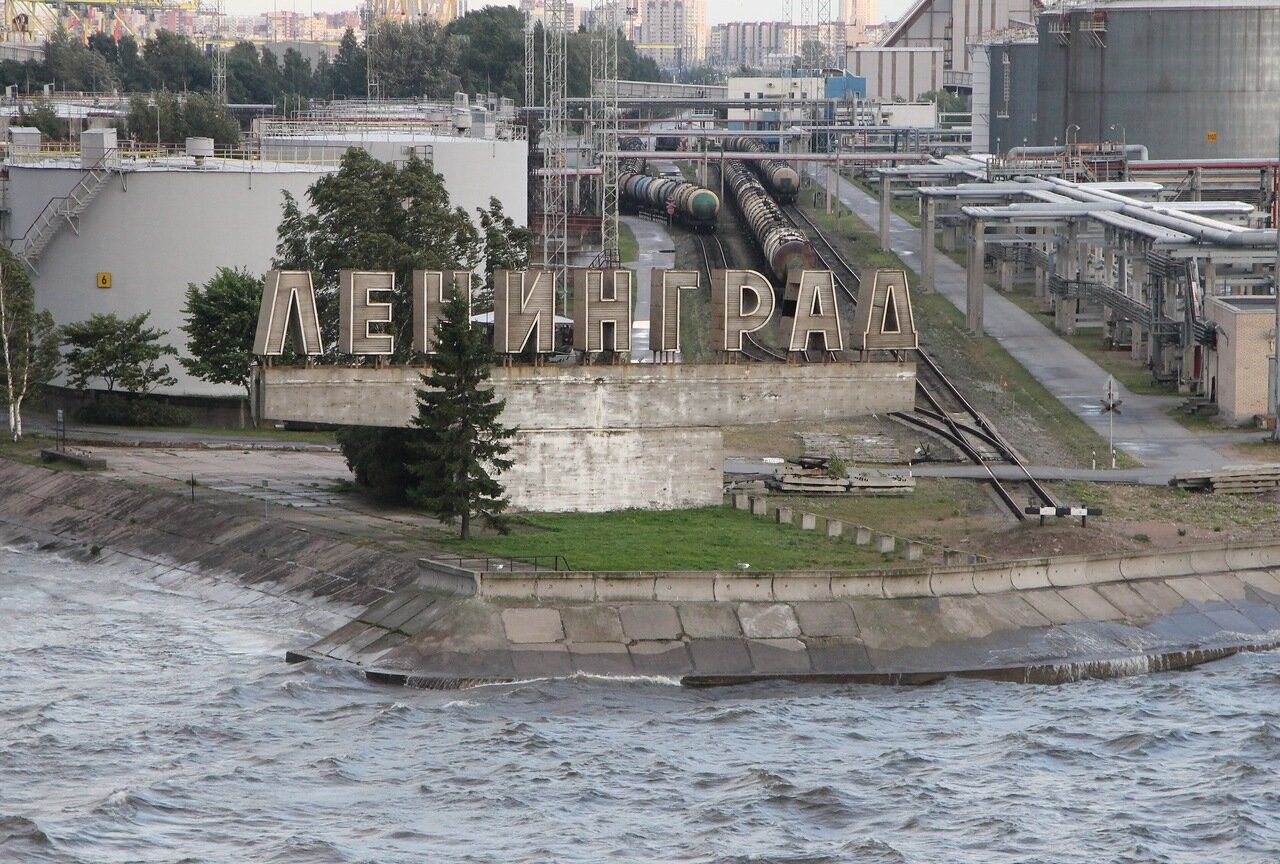 Here the Volga tankers carrying oil from the Caspian sea are unloaded, then the black gold goes West on sea vessels. 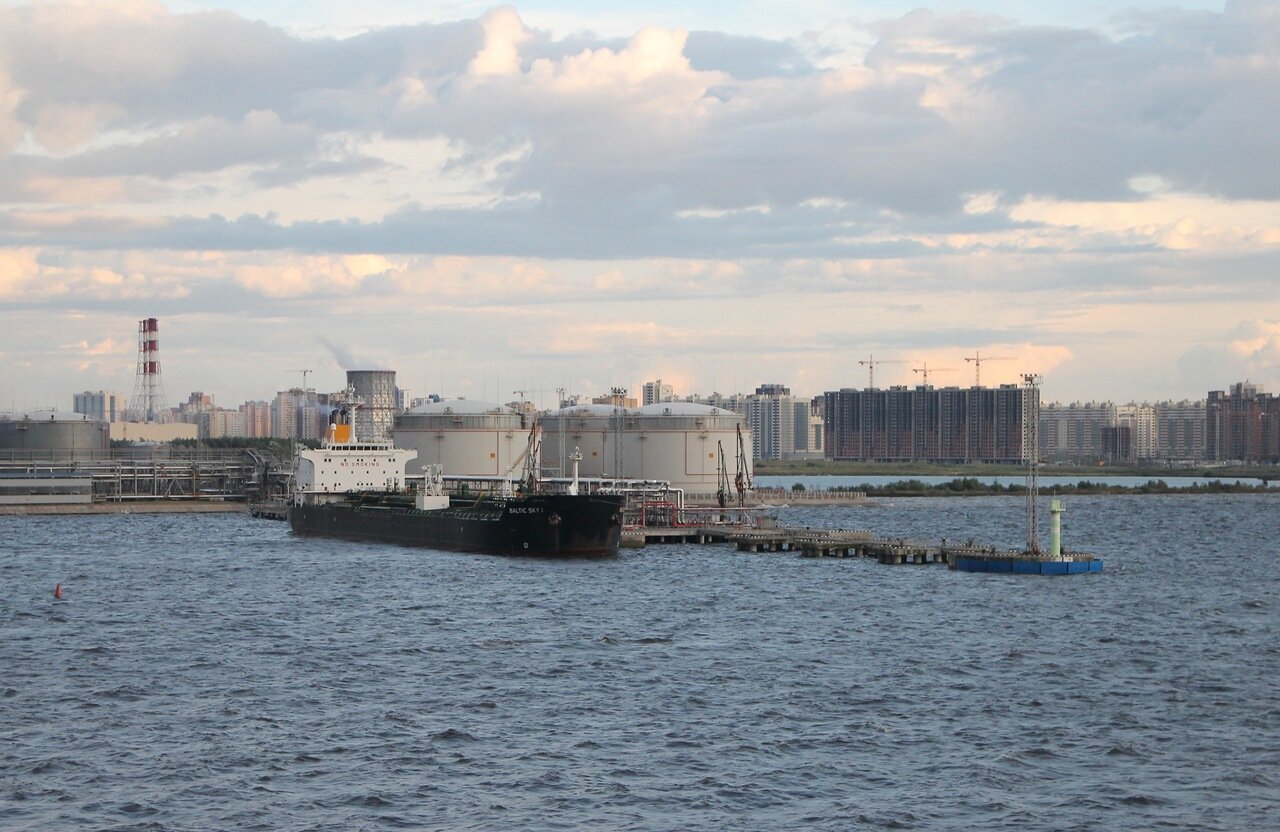 The Western end of the Kanonerskaya spit. There used to be a lighthouse on the promontory, but now all that remains is a pile of broken red bricks. 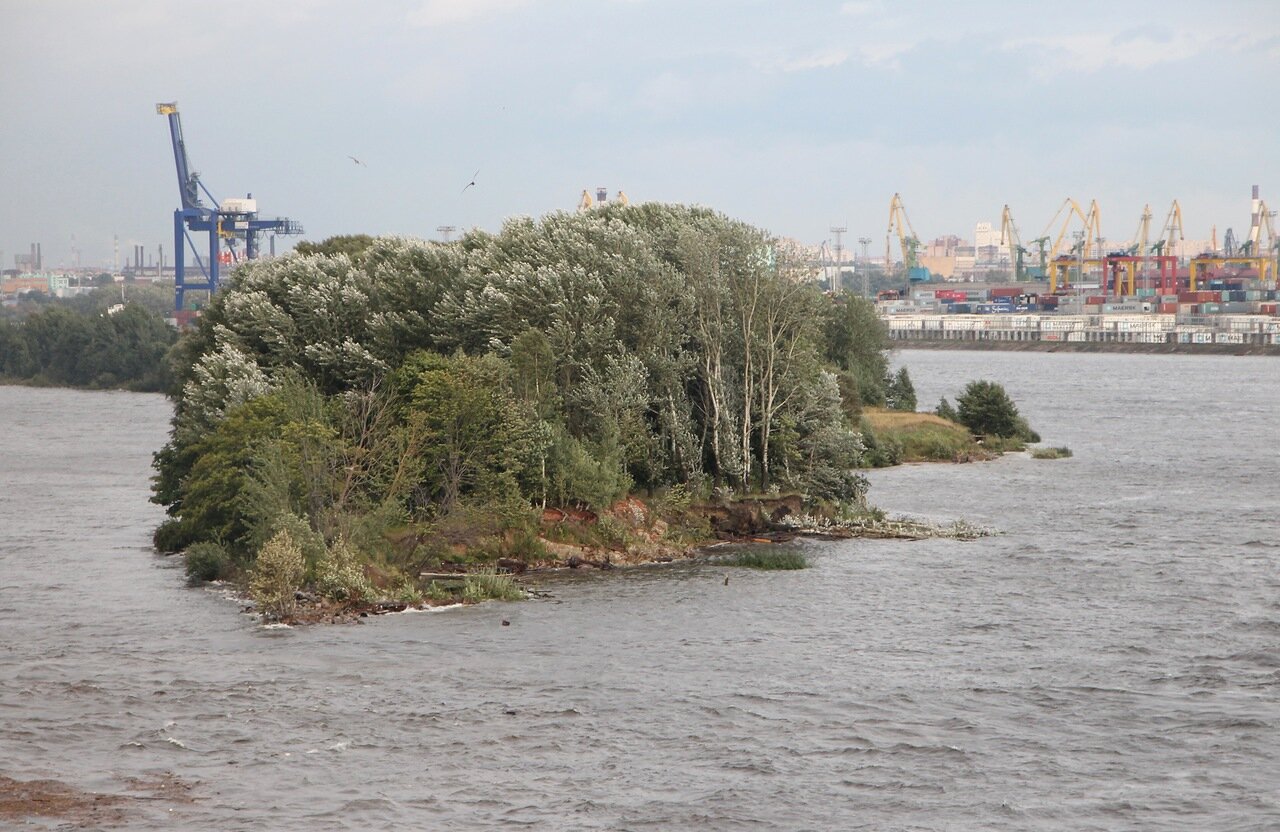 The Kanonerskaya spit continues with the north channel dam, built in the 80's of the 19th century, but it has long been washed away by waves, only in places small islands protrude from the water. It is completely incomprehensible how trees can grow in such a place. Not even that remains of the south dam. 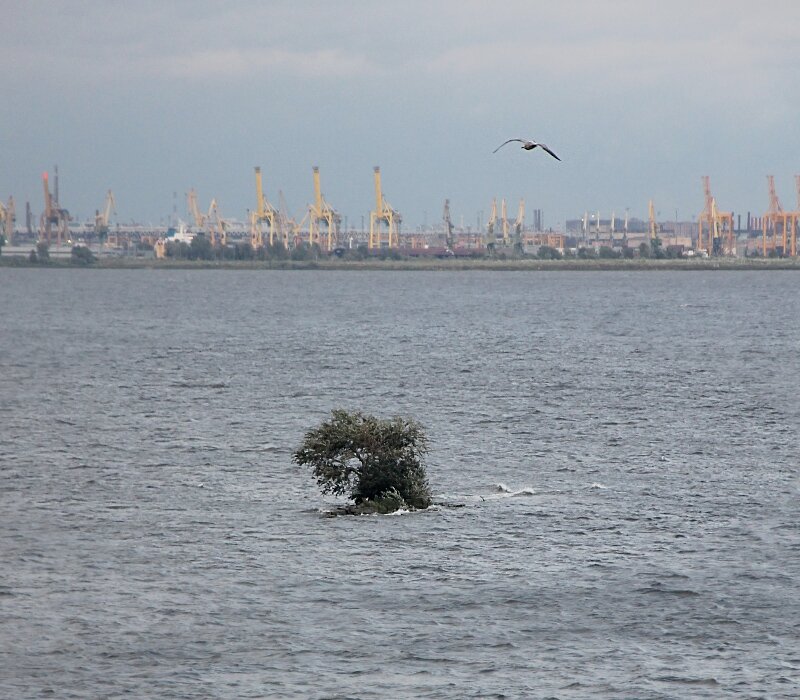 Only the "Head" of the dam with lighthouses marking the entrance to the Sea channel is well preserved. Residential "anthills" are visible in the distance Krasnoselsky district of St. Petersburg. This is not the end of the Sea channel, we have passed only a small part of it, along the water area of the port. The channel goes in the form of about 20 kilometers of artificial deep-water fairway, laid in the shallow Neva Bay, which it is also known as "Marquis's puddle". Now the total length of the channel is 56 kilometers, the width is from 80 to 160 meters, and vessels with a draft of 11 meters can pass through it. 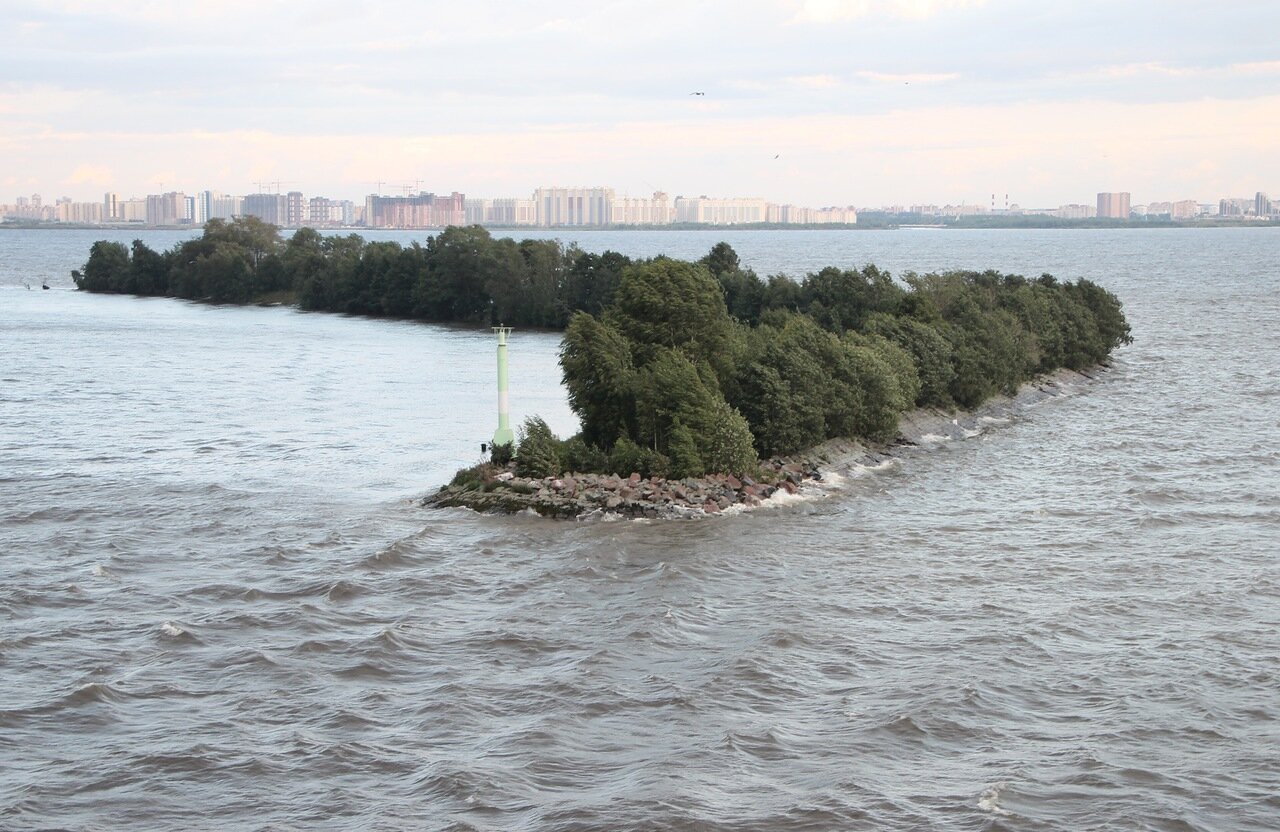